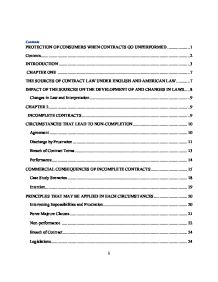 Land law. The purpose of this paper is to present an analytical and investigative study to examine the relationship between the identification of the causes of incomplete contracts and the extent to which this can help protect business interests. To asses

Contents PROTECTION OFF CONSUMERS WHEN CONTRACTS GO UNPERFORMED 1 Contents 2 INTRODUCTION 3 CHAPTER ONE 7 THE SOURCES OF CONTRACT LAW UNDER ENGLISH AND AMERICAN LAW 7 IMPACT OF THE SOURCES ON THE DEVELOPMENT OF AND CHANGES IN LAWS 8 Changes in Law and Interpretation 9 CHAPTER 2 9 INCOMPLETE CONTRACTS 9 CIRCUMSTANCES THAT LEAD TO NON-COMPLETION 10 Agreement 10 Discharge by Frustration 11 Breach of Contract Terms 13 Performance 14 COMMERCIAL CONSEQUENCES OF INCOMPLETE CONTRACTS 15 Case Study Scenarios 18 Intention 19 PRINCIPLES THAT MAY BE APPLIED IN EACH CIRCUMSTANCES 20 Intervening Impossibilities and Frustration 20 Force Majeure Clauses 21 Non-performance 22 Breach of Contract 24 Legislations 24 Remedies for Non-completion of Contracts 25 CHAPTER THREE 26 RECOMMENDATIONS FOR FUTURE RESEARCH 26 CONCLUSIONS 28 INTRODUCTION Over the last few decades, a great deal of research attention has been dedicated to the study of contract law. The field of incomplete contracts in relation to commercial consequences and the measures that companies can take to secure their positions are is still in need of further study and research. , not least because of constantly changing business, legal and technological environments. The impacts of possible changes in business laws and policy have a major significance in dispute settlements, such as those occasioned by incomplete commercial contracts. Logic and intuition suggest that the problems facing contracting parties, in the event of difficulties, would be very different if the agreement contained easily verifiable commitments, such as tariff bindings, as compared to situations where there are a number of different provisions.1 (This still needs clarification.) Hence, a closer analysis of the optimal design of contracts and dispute settlement mechanisms in the context of incomplete commercial contracts is needed to shed light on the causes behind the continuing occurrence of this inconsistency. All contract types, whether joint venture or informal contracts, must reflect the 'settled indicia of a binding contract under Australian law', i.e. ...read more.

The parties concerned enjoy mutual economic and other benefits from the contract. , but the economic benefits override any other benefits that may be derived from the agreement. Once one of the parties decides to disregard the terms of the contract, through any of the previously stated ways, the contract is liable for breach[ML16].(?) Breaches of contract have adverse effects on the parties, leaving them unable to enjoy the advantages of the contract.35 No positive advantages can be derived from a breach of contract. The negative commercial negative effects of breach of contract are discussed below.36 Breach of cContract breach has a wide range of consequences to the parties involved. in the contract. Breaches of contract have It has a negative commercial impact on contracts that were designed for the parties to enjoy economic monetary benefits. Breaches may result in the closing down ure of a business set up by the contract. Parties to the contract would not be in a position to enjoy the advantages that might have been obtained from the completion of the contract depending on the circumstances of the contract and its conditions.37 There are costs too, in the event of incomplete contracts involving institutions which form contracts with society [ML17]to produce results and products that are beneficial to the environment and other third parties. If, in the long-term the organization fails to deliver according to the intended purpose of its initiation, the third parties or the environment fail to be benefited from the contract. This could severely damage be disastrous to the image of the organization and to the organization itself over time, causing loss of customers to suffer from and the inability to enjoy the economic benefits derived from the project.38 It is possible for individuals to experience these losses just because of acts of recklessness and inconsideration regarding the reasons that they originally entered into the contract. ...read more.

There is a rich possibility for Australian contract law to strengthen its strongest aspects, while at once seeking to minimize the effects of the weakest areas of its laws, by using the laws from other judicial contexts and jurisdictions as a basis for consumer protection policies and legislations to render them more efficient. This paper details the sources of laws in Australia, which are largely similar to the many other major judicial jurisdictions across the world; by their very nature, these sources are bound to give rise to different laws and approaches for more effectively addressing the various aspects of contracts.68 The major aspect highlighted by this paper involves the determination of the validity and the enforcement of the contracts, which is heavily reliant on equity maxims. In contrast to Australian contract laws, the United States and other major legal traditions have increasingly emphasized good faith as opposed to equity. This paper suggests the possibility of a greater role for good faith in supplementing equity principles.69[ML26] The paper details the remedies available to aggrieved parties for non-performance or non-completion of contracts. The remedies provided under common vary, but efforts are made to render them fair and equivalent to the monetary and other injury incurred by the aggrieved parties. The benefits to the parties of the contract arise once contracts are initiated, and breaching of contract terms will not allow the individuals to enjoy those benefits. It is in the interest of justice to offer suitable remedies to the plaintiffs to restore them to their original position.70 While these remedies are sufficient in most instances, what is lacking is the capacity of the law to determine the circumstances of each individual case, applying different principles, which are largely supported by laws, but perhaps most crucially, by the legal traditions that exist in a country.71 The paper fails to illustrate basic concepts in contract law. The conclusion is not what has been discussed in the text. And there is no thesis in the paper. There are too many linguistic and legal confusions. ...read more.