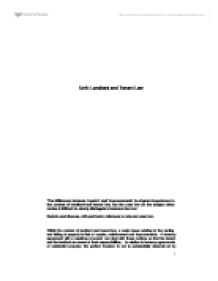 ‘The difference between ‘repairs’ and ‘improvements’ is of great importance in the context of landlord and tenant law, but the case law on the subject often makes it difficult to clearly distinguish between the two.’

Explain and discuss, with particular reference to relevant case law.

Within the context of landlord and tenant law, a major issue relating to the renting and letting of property is that of repairs, maintenance and improvements.  A tenancy agreement with a repairing covenant can deal with these matters so that the tenant and the landlord are aware of their responsibilities.  In relation to tenancy agreements of residential property, the parties’ freedom to act is substantially determined by statute, in particular by the Landlord and Tenant Act 1985.  In respect of tenancy agreements for commercial properties however, the parties are largely free to agree their own repairing obligations.  Thus it is crucial that the terms of the tenancy agreement are carefully worded in order to avoid ambiguity.  However, the distinction between a ‘repair’ and an ‘improvement’ has become blurred and where disputes have occurred, both tenants and landlords have sought redress in the Courts.

Mackenzie & Phillips (2008 p199) state that, “Every lease, even the most informal, contains provisions which define the obligations of the landlord and tenant under the lease”.  Furthermore, Mackenzie & Phillips (2008, p212-3)  point out that in respect of most leases (other than the shortest) detailed covenants will be contained in the lease, outlining the repairing obligation of the tenant and the landlord and such covenants will vary considerably according to the circumstances.  For example, with a long lease of 99 years, a tenant would be expected to undertake all the necessary repairs to the building, including repairs of a structural nature.  In shorter leases however, the landlord would agree to maintain the structure while the tenant would decorate and carry out minor internal repairs. Clarke and Greer (2008, p145)  comment that most landlords accept that everyday wear and tear is inevitable and that, “Unlike the landlord, the tenant will not be subjected to any implied obligation to repair the leased premises.  In practice, the lease usually includes a clause requiring the tenant to keep the premises in ‘good tenantable repair’.”

Mackenzie and Phillips (2008, p214) state that under ss11-14 of the Landlord and Tenant Act 1985, certain covenants are implied into all leases of “less than seven years”.  These implied covenants oblige the landlord:

“(a)  to keep the structure and exterior in repair; and

(b) to keep in repair and working order the facilities for the supply of water, gas, electricity, sanitation, space heating and water heating.”

Edwin Johnson QC in his lecture, ‘Problems and Solutions in Enforcing Duties to Repair in Leases of Commercial Premises’ (2008) highlighted the distinction between a residential and a commercial lease when he stated that,  “In relation to leases of residential premises the parties’ freedom of contract is substantially interfered with by statute, in particular the Landlord and Tenant Act 1985.  The same is not true in relation to leases of commercial premises.  The parties are largely free to agree on their own repairing obligations”.  Edwin Johnson QC highlighted the importance of the drafting of the commercial lease and stressed that consideration should be given to specific questions including:

The Tenancy Agreement Service(2008) provides legal information on all aspects of Housing Law in England and Wales.  In their view, the term “repair” generally relates to the renewal or replacement of certain parts of the building whereas the term ‘improvement’ implies adding things to the property that do not already exist in order to upgrade it.  The TAS also notes that even the most carefully worded tenancy agreements can be problematic because various Acts of Parliament often overrule the tenancy agreement.  (The Tenancy Agreement and Responsibility for Repair and Maintenance (2008) )

Sexton R., (2006 p102-3) discussed the significant case of Ravenseft Properties Ltd v Davstone (Holdings) Ltd (1979), 2 WLR 897 which introduced the potential for ‘renewal’ or ‘improvement’ to constitute a ‘repair’.  The demised building in this case was a block of flats with stone cladding which began to bow away from the wall.  In order to address the health and safety issues caused by stones falling, the landlord made full repairs.  The tenant - a property development company - had covenanted to be liable for repairs so the landlord brought an action against the tenant in order to recover the full cost of the repairs.  The tenant maintained that the cladding was inherently defective because in the original design, no expansion joints had been incorporated.  The remedial work carried out by the landlord, which included installing the necessary expansion joints, was therefore deemed by the tenant to be an ‘improvement’ not a ‘repair’ - an obligation not covenanted in the tenant’s lease.  Unfortunately for the tenant, Judge Justice Forbes ruled in favour of the landlord, since the tenant was liable to return to the landlord a safe building rather than a dangerous one.  Judge Justice Forbes stated, “..it is always a question of degree whether that which the tenant is being asked to do can properly be described as a repair, or whether on the contrary it would involve giving back to the landlord a wholly different thing from that which he demised”.  Following Ravenseft, the question of repair is to be considered in terms of fact and degree in relation to the overall cost of the works compared with the value of the property.  According to Wilkie, Luxton, Morgan and Cole (2006 p95), “One of the main factors that influenced the Court in this case was the relative cost of the repair (a mere two percent) to the value of the building aa a whole.”

According to Smith (2006 p397) the case of Stent v Monmouth DC (1987) 54 P & CR 193 illustrates more clearly than Ravenseft, that “preventative work may be   required even where it could be seen as separate from correcting the disrepair.” In this case a house which was built in 1953 suffered water penetration because the front door was not weatherproof.  Various unsuccessful repairs were carried out, including the fitting of a new door.  Eventually, a sealed aluminium door and frame were fitted and this solved the problem.  The remedial works in this case went further than a repair and involved replacing the defective wooden door with a better designed aluminium door and frame.  This was necessary to prevent a recurrence of the damage which had already occurred.  It could be argued that this was in fact an  ‘improvement’ but the Judge deemed the work to be a necessary ‘repair’ within the terms of this particular lease.

Wilkie et al (2006 p95-6) note that the scope of repairing covenants was reviewed by the Court of Appeal in the case of McDougall v Eastington D. C. (1989) 58 P & CR 193. Following this case, the Court of Appeal identified three tests that should be applied to determine whether the required works constitute repair or something more.  These tests may be applied separately or concurrently and are as follows:

Edwin Johnson QC in his lecture, ‘Problems and Solutions in Enforcing Duties to Repair in Leases of Commercial Premises’ (2008) cited the case of Credit Suisse v Beegas Nominees Ltd (1994) 1 EGLR 78.  This case illustrates once again the importance of the exact wording in a commercial lease, where the relevant obligation of the tenant was:

In this case, the demised property was an office building which leaked badly as a result of a defective cladding on the outer walls. The cladding itself was not in disrepair but water penetrated the ground floor as a result of an inherent design defect in the cladding.  Judge Lindsay ruled in favour of the landlord noting that the latter part of the covenant imposed a separate obligation (upon the tenant) to “otherwise keep (the premises) in good and tenantable condition”, which imposed a liability beyond that of repair.  Judge Lindsay considered that the entire removal of the defective cladding and its replacement with a new, redesigned system, was therefore within the obligation of the tenant’s repairing covenant in this case.   (Problems and Solutions in Enforcing Duties to Repair in Leases of Commercial Premises,  (2008) )

Conversely,  in the case of Wainwright v Leeds City council (1984) 1 EGLR 67. Lord Justice Dunn found in favour of the landlord, agreeing that the installation of a damp-course in property which did not originally have one was not a repair.  He stated that:

Determining the line between repair and improvement is a problem, according to Smith (2006 p397) and he also cites the case of Wainwright v Leeds City Council (1984) 1 EGLR 67. and states, “terraced houses had been built many decades ago without a damp-course.  The Court of Appeal was adamant that complaints about damp required improvement of the property rather than repair”.

A similar case concerning damp, but on this occasion resulting from condensation, was cited by Dr Andrew McGee in The QUT Law and Justice Journal (2007).   In  the case of Quick v Taff Ely Borough Council (1985) EWCA Civ 1; (1986) 1 QB 809, the tenant leased a house which, over a number of years, suffered severe condensation  (caused by the lack of insulation around concrete window lintels and single glazing in metal framed windows).  The condensation problems resulted in damage to clothes, bedding, furniture and interior decoration and made living conditions intolerable for the tenant.  Dr McGee noted that an important factor in this case was the liability (under the repairing covenant of the landlord) to keep the structure and exterior of the premises in repair, not the internal decoration.  The inherent defects did not therefore cause ‘damage’ to the building, but it affected the ‘amenity’ of the premises.  Since the building was not in a state of disrepair, Lord Justice found in favour of the landlord and stated:

“The key factor in the present case is that disrepair is related to the physical condition of whatever has to be repaired, and not to questions of lack of amenity or inefficiency...Where decorative repair is in question one must look for damage to the decorations but where, as here, the obligation is merely to keep the structure and exterior of the house in repair, the covenant will only come into operation where there has been damage to the structure and exterior which requires to be made good.”

As has been shown above, relevant case law suggests that over the years, the question of what constitutes a ‘repair’ and an ‘improvement’ in a lease or tenancy agreement has become blurred and it is often difficult to distinguish between the two. Where disputes have occurred, both tenants and landlords have sought redress in the Courts and the outcome is sometimes unexpected.  From a brief review of case law, important lessons can be learned.  The wording in a repairing covenant of a tenancy agreement is crucial, both when it is being drafted and when it is being enforced; however, no covenant can be drafted to cover every eventuality.  Therefore, within the framework of case law, the outcome of disputes between landlords and tenants will be determined following the Judge’s deliberation concerning all the circumstances of the case, including the wording of the lease and the nature of the particular defect under consideration.

Johnson, E. QC. (2008).  Problems and  Solutions in Enforcing Duties to Repair in Leases of Commercial Premises.  Retrieved 20 September 2008 from http://www.maitlandchambers.com/Files/Article/PDF/Dilapidations%20lecture%20for%20HenryStuart%20by%20EJ%20Feb08.doc

This student written piece of work is one of many that can be found in our University Degree Land Law section.