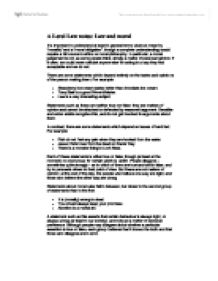 A Level Law notes: Law and moral It is important to understand at least in general terms what we mean by "morality" and a "moral obligation", though a complete understanding would require a full course in ethics or moral philosophy. In particular, a moral judgement is not, as some people think, simply a matter of personal opinion: if it were, we could never criticise anyone else for acting in a way they find acceptable and we do not. There are some statements which depend entirely on the tastes and opinions of the person making them. For example: * Strawberry ice-cream tastes better than chocolate ice-cream. * Tony Blair is a good Prime Minister. * Law is a very interesting subject. Statements such as these are neither true nor false: they are matters of opinion and cannot be attacked or defended by reasoned argument. Sensible and sober adults recognise this, and do not get involved in arguments about them. In contrast, there are some statements which depend on issues of hard fact. For example: * Fish do not feel any pain when they are hooked from the water. * Jesus Christ rose from the dead on Easter Day. * There is a monster living in Loch Ness. Each of these statements is either true or false, though (at least at the moment) no one knows for certain which is which. People disagree - sometimes quite strongly - as to which of them are true and which false, and try to persuade others to their point of view. But these are not matters of opinion: at the end of the day, the people who believe one way are right, and those who believe the other way are wrong. Statements about moral rules fall in between, but closer to the second group of statements than to the first. * It is (morally) wrong to steal. * You should always keep your promises. ...read more.

Granting certiorari to quash the decision, Laws J and the Court of Appeal (Swinton Thomas LJ dissenting) said members of the Council were not allowed to take moral considerations into account in making their decision. They were required to act in the interests of the good management (by implication, the economic good management) of the land, and must not allow themselves to be swayed by irrelevant factors. No moral blame attaches to a person who is doing her best, but he or she may still be legally liable for the consequences of an accident caused by lack of experience of skill. Nettleship v Weston [1971] 3 All ER 581, CA A learner driver D went out for her first lesson, supervised by a friend P. D crashed the car into a lamppost, and P was injured. P's claim for damages was upheld by the Court of Appeal, subject to a deduction for contributory negligence. Even learner drivers, said the Court, are to be judged against the standard of the reasonably competent driver. The fact that a particular driver is inexperienced and incompetent does not excuse his falling short of this standard. Morally the learner driver is not at fault, said Lord Denning MR, but legally she is liable to be because she is insured and the risk should fall on her; Megaw LJ added that tortious liability has in many cases ceased to be moral blameworthiness. A person whose inhibitions are released by involuntary intoxication may still be criminally liable. R v Kingston [1994] 3 All ER 353, HL A man D with homosexual paedophilic tendencies went to the flat of another man X. Unknown to D, X intended to lure D into a compromising situation in order to blackmail him, and drugged D's coffee. X then took D into a bedroom where there was a 15-year-old boy, also drugged. D performed various acts with the boy and was subsequently charged with indecent assault. ...read more.

Lord Lowry said sado-masochistic practices are not conducive to the enhancement or enjoyment of family life or the welfare of society, and any relaxation in the law would encourage such practices. But Lord Mustill, dissenting, said the question was not whether the men's conduct was morally right - most people would say not - but whether it was criminal, and he would not distort the meaning of the relevant statute to make it so. Lord Slynn, also dissenting, said it is not for the courts in the interests of paternalism or to protect people from themselves to introduce into statutory crimes concepts that do not properly fit there. Laskey Brown & Jaggard v United Kingdom (1997) 24 EHRR 39, ECHR In this application, arising from the case above, the Lords' decision was upheld by the European Court of Human Rights. The Court acknowledged (as indeed did HM Government) that the law as stated by the House of Lords involved an infringement of the defendants' right to respect for their private life, but said it was justified as necessary for the protection of health and/or morals. European Convention on Human Rights Article 8 (1) Everyone has the right to respect for his private and family life, his home and his correspondence. (2) There shall be no interference with a public authority with the exercise of this right except such as is in accordance with the law and is necessary in a democratic society in the interests of national security, public safety or the economic well-being of the country, for the prevention of disorder or crime, for the protection of health or morals, or for the protection of the rights and freedoms of others. The Convention does not specify whether it is public or private morality that is concerned, but this decision from a normally liberal court appears to validate the arguments of those who say the regulation of private morality is a legitimate matter for the criminal law. ...read more.