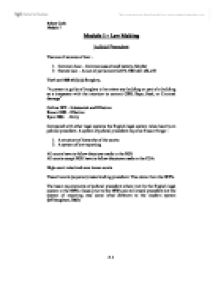 Module 1 - Law Making Judicial Precedent There are 2 sources of law: - 1. Common Law - Common assault and battery, Murder 2. Statute Law - An act of parliament OAPA 1861 s47, s20, s18 Theft act 1968 s9 (1) (a) Burglary, "A person is guilty of burglary is he enters any building or part of a building as a trespasser with the intention to commit GBH, Rape, Steal, or Criminal damage" Collins 1972 - Substantial and Effective Brown 1985 - Effective Ryan 1996 - Entry Compared with other legal systems the English legal system relies heavily on judicial precedent. A system of judicial precedent requires 2 basic things: - 1. A structure of hierarchy of the courts 2. A system of law reporting All courts have to follow decisions made in the HOL All courts except HOL have to follow decisions made in the COA. High court rules bind over lower courts These 3 courts (superior) make binding precedent. This stems from the 1870's. The basic requirements of judicial precedent where met by the English legal system in the 1870's. Cases prior to the 1870's can still create precedent but the system of reporting was some what different to the modern system (M'Naughton, 1843) Binding Judicial Precedent This is a rule of law which must be followed by all inferior courts. E.g. the precedent created in M'Naughton by the HOL sets out the rules of insanity which must be followed by all courts in the system. Only the HOL, COA, and High Court can create binding precedent. The binding judicial precedent stems from what is known as 'RATIO DECIDENDI' of the case. This is the reasons put forward by the judges on why they have reached this decision. The specific words of the decision form the rules which the inferior judge's must follow. The judge summarises up the reasons for the decision. ...read more.

In 1584 statutes were written in much more detail Other Aids to interpretation As the judge attempts to interpret the statute, he is required to apply each rule in turn. If the 1st rule doesn't answer the problem he moves to the 2nd and 3rd. To help the judge operate within these rules he is allowed to use a wide variety of internal and external aids to interpretation. Internal - Intrinsic aids - Within statute - E.g. Lies before and after External - Extrinsic aids - Not in statute - E.g. Hansard Intrinsic aids to interpretation 1. The statute itself - Title of statute - Sub Headings - Other sections 2. Explanatory notes - since 1999 all statutes are produced with notes 3. Rules of language * Ejusdem Generis rule - General words follow specific words The general words have the same meaning E.g. Cats, Dogs, and other animals Powell v Kempton race course 1899 - Gambling. Statute used "house, office, room, or other places of betting" they had set up tables outside the race course to bet Other places meant other buildings Allen v Emmerson 1944 - "theatres, and other places of entertainment" Funfair? Yes * Expressio Unius rule - The mention of 1 thing expressively excludes all others E.g. Guide dogs excepted excludes all other dogs Tempest v Kilner 1846 - "goods, wears, and merchandise" stocks and shares? No * Noscitur a Sociis rule - Words draw their meaning from the words around them. E.g. Dog, Food, Other canine equipment IRC v Frere 1965 - "interest, Annuities and other annual interest" What did interest mean? Annual interest (money) Bromley LBC v GLC 1983 - "economic" meant cheap, not business by GLC, but HOL disagreed Extrinsic aids to interpretation Having used all possible clues to the statute judges can then look to any external source that may give them guidance 1. The Historical setting - a statute may have been a response to a particular situation or series of events. ...read more.

2. White Paper This sets out the governments intentions on how they will proceed with the issue 3. The Queen's Speech States that the bill will be introduced in the next parliamentary session The process of a bill becoming law Most bills; public and private members bills are introduced first into the HOC although the HOL occasionally is the starting point. 1. First Reading This is to introduce it to the house. There is no debate/vote. It is just read out. 2. Second Reading Formal debate on the whole bill. This can be a long time. Most private members bills run out of time at this stage. A vote is also taken. 3. Committee stage This is a mini version of the HOC. The committee is in the exact same ratio as HOC but only includes 30-50 members. The committee goes through the bill line by line and makes amendments as necessary. These amendments may be legal and political the committee may make amendments under pressure from pressure groups, E.g. Various churches 4. Report Stage The Committee reports back on each amendment made on the bill. Each amendment can be accepted or ejected. The commons occasionally send the bill back to the committee for further amendments. 5. Third Reading By this stage the process is normally a formality. There is a brief debate and a final vote. However, the opposition opposing the amendments can force a vote on each amendment made to 'waste' time and force the bill to run out of time. The next Stage The bill is now sent to the HOL which performs the exact same process as the HOC. The HOC then returns the bill to the commons with amendments. If the amendments are accepted the bill proceeds to Royal Ascent. After Royal Ascent the act becomes law on a pre-determined date. Depending on the type of legislation the date can be anything from a few weeks to over a year form the Royal Ascent. Robert Cook Module 1 P. 1 ...read more.