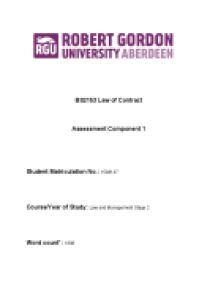 Law of Contract Example considering invitation to treat, offer and acceptance, intoxication of alcohol and revocation of an online purchase.

Transfer-Encoding: chunked ﻿BS2153 Law of Contract Assessment Component 1 Student Matriculation No.: 1508147 Course/Year of Study: Law and Management Stage 2 Word count*: 1698 The issues that are to be analysed within this problem are, invitation to treat, offer and acceptance, intoxication of alcohol and revocation. An offer is a proposal from one party with the intention to be legally bound in such definite terms that, if it is accepted, a legally binding contract will be formed. An offer is the key ingredient to any analysis of contract formation. Without an offer, there will never be a contract. There are often many different communications at the negotiation stage between the parties. The courts are asked to look at these objectively to find the point in time when an offer has been made to somebody. However, there are many communications that do not reach the stage of that offer. To constitute an offer we require the subject matter, the price and who the parties are, just to name a few. However, there are many things that are being said that do not quite reach that standard and which the law labels an invitation to treat. The purpose of an invitation to treat is to invite others to make an offer which can then be accepted by the person who made the invitation.[1] As a general rule, an advertisement is only ...read more.

During a previous purchase Ben had saved his personal and payment details in order to speed up the process the next time he was purchasing from the website. He then, unbeknown to him, placed the double-decker bus in his shopping basket instead of simply adding it to his own personal wish list, before proceeding to the checkout. This process is said to replicate the same process of purchasing products within a shop. And so, in this case Ben would have in fact made an offer to buy as he replied to the invitation to treat on the website. Thus, establishing the first criteria needed to form a valid contract. The seller?s response via text confirming his acceptance of Ben?s offer forms the second essential criteria of a contract. Lastly, intention to be legally bound could be said to have occurred when Ben confirmed that he accepted the website and seller?s Terms & Conditions. In conclusion, taking an objective view to these facts it would be apparent that the criteria for a valid contract to be formed has been met. However, because Ben was heavily intoxicated with alcohol at the time of the purchase, the circumstances and validity of the contract may change. This issue within the case is whether intoxication of alcohol can affect the validity of a contract. ...read more.

Whilst they were out of the office, they had ignored all of their business communications. The court held that the letters they failed to open but had received was sufficient communication for the purposes of contract formation. The courts came to this conclusion because it is expected that communications are to be looked at. Another example of this can be seen in the case of McMillan v Caldwell.[12] It was held within this case that a formal written offer to purchase or sell heritable property could be withdrawn verbally, even if error was not an issue, as long as notice of withdrawal was communicated to the other party before an acceptance of the offer had been sent.[13] Looking at the facts of the case in question it is apparent that Ben was too late in revoking his offer as it had already been accepted by the seller. This would suggest that a valid contract was created between the parties. On taking an objective approach to the facts of this case the contract would stand. However, for Ben to be released from the contractual agreement he could go down the path of intoxication of alcohol. As a result of his excessive consumption of alcohol it would be said that he had lost his ability to contract as he was deprived of his exercise of reason. Where capacity is lost for these reasons, any purported contract is null. ...read more.