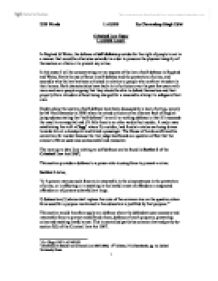 Criminal Law Essay LA15930 Level I In England & Wales, the defence of self-defence provides for the right of people to act in a manner that would be otherwise unlawful in order to preserve the physical integrity of themselves or others or to prevent any crime. In this essay I will be concentrating on two aspects of the law of self-defence in England and Wales, firstly the use of force in self-defence and the prevention of crime, and secondly why the law has been criticised in relation to people who confront intruders in their homes. Both characteristics have had a lot of criticism over the past few years with more and more people arguing that they should be able to defend themselves and their property from intruders without being charged for a reasonable attempt to safeguard their own. Doubts about the system of self defence have been discussed by a host of critics, namely by Mr Noel Sweeney in 2000 where he raised criticism of an inherent fault of English jurisprudence stating that "self-defence" is an all-or-nothing defence in that if it succeeds the result is an acquittal and if it fails there is no other verdict but murder. A major case establishing this is R v Clegg1 where D, a soldier, had fired at a stolen car being driven towards him at a checkpoint and killed a passenger. ...read more.

The Law applied to people who confront intruders in the home is still rather indefinite and disputed by many critics and the public in general. In 2003 during the Christmas period, thousands of Radio 4's Today listeners called for legislation authorising them to protect their homes by any means necessary, the proposal was immediately denounced as a "ludicrous, brutal, unworkable, blood-stained piece of legislation".9 The old rule at common law however was that a home owner may kill a burglar or trespasser and get away with it using the defence of self defence as illustrated in 1905 case of R v Annie Davis10. Lord Hewart's statement in R v Hussey11 was another milestone in the development of the Law relating to home owners confronting intruders in the their homes when he approved the statement 'in defence of mans house, the owner or his family may kill a trespasser who would forcibly dispossess him of it, in the same manner as he might, by, kill in self-defence a man who attacks him personally.' It is therefore clear that the law gave the individual the same rights when protecting his home as it did to someone protecting themselves or another person. Although, even today the law does the same,, the current rule of self-defence is 'reasonable force' as demonstrated in R v Palmer12, meaning the defendant does not have the lawful right to kill an ...read more.

To summarise the law of self-defence is still somewhat ambiguous and with the rule of 'reasonable force' proving to be a difficult and at times prejudiced custom there is plenty of room for improvement. Although there have been several attempts to re-draft and clarify this rule there has been little progress and for now the state consider the standard of reasonable force set out in Palmer still provides sufficient guidance to the jury in deciding whether or not the defendant has used reasonable or excessive force. Although numerous attempts have been made to make the law for homeowners defending their homes more humane none of them have been successful largely due to the fact that more and more people would plead self-defence even if their actions were undoubtably irrational and highly unreasonable. Overall I feel that we are definitely heading in the right direction and with Italy passing a new bill allowing homeowners to shoot intruders without fear of prosecution the pressure is ever increasing. Even so I feel that we need to consider an approach less severe then allowing the homeowner to shoot an intruder, we have lived in Britain in harmony for centuries without the need for guns and I still feel that it is possible to improve the law on self-defence for homeowners without the need to introduce firearms freedom, furthermore the state would be obliged to allow people to purchase and keep guns in their homes without too many consequences increasing other crimes. ...read more.