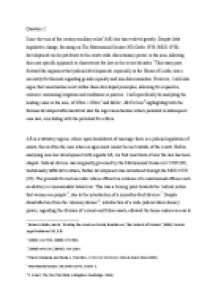 ﻿Question 2: Since the turn of the century ancillary relief (AR) law has evolved greatly. Despite little legislative change, focusing on The Matrimonial Causes (NI) Order 1978 (MCO 1978), development can be put down to the courts wide discretionary power in the area, allowing this case specific approach to characterise the law in the recent decades.[1] This essay puts forward the argument that judicial developments, especially in the House of Lords, was a necessity for fairness regarding gender equality and non-discrimination. However, I will also argue that uncertainties exist within these developed principles, allowing for expensive, resource consuming litigation and confusion in practice. I will specifically be analysing the leading cases in the area, of White v White[2] and Miller; McFarlane[3] highlighting both the fairness developed afterwards but also the legal uncertainties which persisted in subsequent case law, concluding with the potential for reform. AR is a statutory regime, where upon breakdown of marriage there is a judicial regulation of assets, this is often the case when an agreement cannot be met outside of the courts. Before analysing case law development with regards AR, we first must look at how the law has been shaped. Judicial divorce was originally governed by the Matrimonial Causes Act 1939 (NI), traditionally difficult to obtain, further development was introduced through the MCO 1978 (NI). The grounds for such an order where offered on evidence of a matrimonial offence such as adultery or unreasonable behaviour. This was a turning point towards the ?radical notion that women are people?[4], due to the introduction of a mixed/no-fault divorce[5]. Despite dissatisfaction from the ?alimony drones?[6], introduction of a wide judicial discretionary power, regarding the division of current and future assets, allowed the home-makers access to property as well as allowing financial provision orders, thus working against the societal fear of ?Casanova?s Charter,?[7] allowing for the foundations of fairness to begin to develop in the law. ...read more.

Whilst this wasn?t ring-fenced, the applicant had a weaker claim to this property especially within shorter marriages. In longer marriages, the two types of property tended to merge. However, the HL had query over business assets developed by one party alone, with Baroness Hale placing them in non-matrimonial property and Lord Nicholls disagreeing.[42] Therefore, questions on scope of matrimonial property and when to depart from equal sharing where left unanswered for future occasion.[43] Further issue arose around the affirmation of ?special contributions.?[44] It was clarified in order to depart from equal sharing their must be a ?genius quality? that created the wealth[45]. Despite development to incorporate both financial and non-financial contributions, a distinction was essentially introduced between the bread-winner and the home-maker, allowing inequality ?through the back door,?[46] more so, with no threshold of wealth which could constitute a special contribution, confusion arose, despite finding that the special contribution on behalf of one party would affect the award, this was mainly aimed towards the financial contributor.[47] Subsequently, further transparency is needed with regard a spouse?s future income being subjected to financial orders for compensation. As per McFarlane, should it apply strictly to applicants with evidence of a lucrative career which was given up? And if so what is the staring income, or what defines a ?lucrative? career?[48] And to what point would a judge impose values on ?subjective, non-pecuniary worth? of different career fields.[49] Therefore, the courts have contained this area restrictively, in order to aid such uncertainties, by allowing a spouse with ordinary career paths, to be compensated accordingly by general assessment,[50] however this was not expressly limited. It was observed in subsequent case law that claim for compensation in AR is a feature to aid fairness rather than a claim in its own right.[51] Thus, compensation for market sacrifices has now been established as an independent element award but the scope is unclear. ...read more.