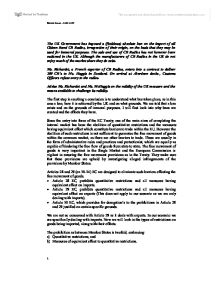 Law with respect to the importing of Citizen Band CB radios.

The UK Government has imposed a (fictitious) absolute ban on the import of all Citizen Band CB Radios, irrespective of their origin, on the basis that they may be used for immoral purposes. The sale and use of CB Radios has not however been outlawed in the UK. Although the manufacturers of CB Radios in the UK do not enjoy much of the market share they do exist. Ms. Richardot, a French exporter of CB Radios, enters into a contract to deliver 200 CB's to Ms. Haggis in Scotland. On arrival at Aberdeen docks, Customs Officers refuse entry to the radios. Advise Ms. Richardot and Ms. McHaggis on the validity of the UK measure and the means available to challenge its validity. The first step in reaching a conclusion is to understand what has taken place, as in this case a ban, how it is achieved by the UK and on what grounds. We are told that a ban exists and on the grounds of immoral purposes. I will first look into why bans are created and the effects they have. Since the entry into force of the EC Treaty, one of the main aims of completing the internal market has been the abolition of quantitative restrictions and the measures having equivalent effect which constitute barriers to trade within the EU. However the abolition of such restrictions is not sufficient to guarantee the free movement of goods within the common market, as there are other barriers to trade. ...read more.

However although the German regulation was indistinctly applicable, the result of the measure was to ban French Cassis from the German market. In this case a number of German importers contested the measure. The ECJ applied the Dassonville formula, but developing a suggestion of the court in Dassonville that State measures falling within the formula might be acceptable where the restrictions on intra-Community trade were 'reasonable'. This principle ('the first Cassis principle'), states that certain measures, though within the Dassonville formula, will not breach Article 28 (ex 30) if they are necessary to satisfy mandatory requirements (known as the 'rule of reason'). It confirms that Article 28 covers measures applying in the same way to domestic and imported goods. Also on the basis of this judgement has also been built the principle of "mutual recognition", meaning that a Member State cannot, in principle prohibit the sale on its territory of goods which are lawfully produced and marketed in another Member State. This is the case even if those goods are produced to technical or qualitative descriptions that differ from those required of its own goods. Therefore when looking into our scenario, is it justifiable to ban CB radio imports, even though they have not been outlawed in the UK. This does not seem fair. So where else can we turn for help. This would lead to Article 30. The principle provision for derogation from Articles 28 and 29 (ex 30-34) ...read more.

In this case Article 36 (now 30) was invoked to justify the seizure by HM Customs and Excise of a number of inflatable rubber dolls together with other exotic and erotic articles imported from Germany, on the grounds that they were 'indecent and obscene'. The importers claimed that the seizure was in breach of the then Article 30 (now 28), as there was no ban on the manufacture and sale of such items in the UK, therefore being discriminatory. The court held that the seizure was not justified under the then Article 36 (now 30), as unlike R v Henn, there was no general prohibition on the manufacture and marketing of such goods in the UK. Neither did they adopt serious and effective measures to prevent the distribution of such goods in its territory. The main case for the scenario is whether the ban is justified or not. Firstly both the parties, referring to Ms. Richardot and Ms. Haggis should have enquired into any measures created by the UK effecting their agreement. However if the ban was recent and not in existence at the time the contract was made, then the two parties are not to blame, for their lack of investigation. However overall past cases and arguments taken place, would presumably distinguish the party at fault, meaning whether the ban was justified or not. Looking through my research essay it can be said that there are many cases mentioned which apply to our scenario and are capable of challenging the validity of the ban. ...read more.