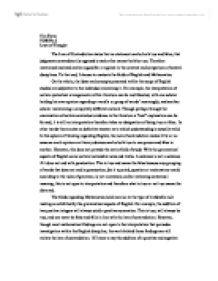 Tim Flynn TOK/Per.2 Laws of Thought The Law of Contradiction states that no statement can be both true and false; that judgments contradictorily opposed to each other cannot both be true. The afore mentioned resolved can be argued for or against in the contrast and comparison of several disciplines. To that end, I choose to evaluate the fields of English and Mathematics. On the whole, the ideas and concepts presented within the scope of English studies are subjective to the individual examining it. For example, the interpretation of certain syntactical arrangements within literature can be multifaceted, with one scholar holding his own opinion regarding a word's or group of words' meaning(s), and another scholar maintaining a completely different outlook. ...read more.

With the grammatical aspects of English come certain inalienable rules and truths. A sentence is not a sentence if it does not end with punctuation. This is true and cannot be false because any grouping of words that does not end in punctuation, (be it a period, question or exclamatory mark) according to the rules of grammar, is not a sentence; unlike reviewing contextual meaning, this is not open to interpretation and therefore what is true or not true cannot be distorted. The fields regarding Mathematics hold more so to the type of irrefutable rule making as exhibited by the grammatical aspects of English. For example, the addition of two positive integers will always yield a positive summation. ...read more.

Overall, through comparing and contrasting the two fields of English and Mathematics, the law of contradiction seems to be largely unwarranted as it does not take into account a) the differing schools of thought within individuals (i.e. literary interpretation) and b) the application of existing sets of laws (as evident in mathematics). Though both fields of study hold elements that support the law, such as in grammar rules or mathematical law, numerous extraneous variables in both English and Mathematics make nonsense of the law. If A is not-A, how is so much evidence to the contrary in both fields (and most likely others) existent? It is my personal finding that the law of contradiction is fallacious in regards to the disciplines of English and Mathematics. Word Count: 575 ...read more.