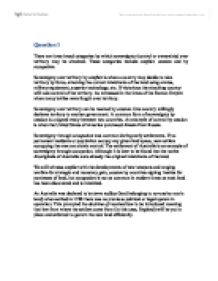 Question 1 There are three broad categories by which sovereignty (control or ownership) over territory may be obtained. These categories include conflict, cession and by occupation. Sovereignty over territory by conflict is when a country may decide to take territory by force, attacking the current inhabitants of the land using armies, military equipment, superior technology, etc. If victorious the attacking country will take control of the territory. As witnessed in the times of the Roman Empire when many battles were fought over territory. Sovereignty over territory can be reached by cession. One country willingly declares territory to another government. A common form of sovereignty by cession is a signed treaty between two countries. An example of control by cession is when the United States of America purchased Alaska from Russia. Sovereignty through occupation was common during early settlements. If no permanent residents or population occupy any given land space, new settlers occupying the area can obtain control. The settlement of Australia is an example of sovereignty through occupation. Although it is later to be found that the native Aboriginals of Australia were already the original inhabitants of the land. We still witness conflict with the developments of new weapons and waging warfare for strategic and monetary gain, cession by countries signing treaties for purchases of land, but occupation is not as common in modern times as most land has been discovered and is inhabited. As Australia was declared to be terra nullius (land belonging to no-one/no man's land) ...read more.

Conclusion: I believe that the Shire of Green Valley has acted partially ultra vires. Question 2 (b) The Area of Law The area of law relevant to this question is the common law rules of statutory interpretation Principles of Law Sometimes, to the common citizen laws passed by parliament or delegated legislation can be difficult to understand. It is the role of the courts to interpret the words used in the statute. The need for words and phrases used in legislation to be interpreted can arise because it is possible for words to have more than one meaning, or the meaning of words may change over time or simply that the language used is difficult to understand. There exists two main categories of approaches or rules that have been devised to assist the courts when interpreting legislation, these are statutory rules and common law (or judge-made) rules. Common law rules of statutory interpretation consist of three principal approaches: * Literal Approach * Golden Rule * Mischief Rule A judge has the right to choose which of the rules he will apply to any given case however; he can only use one rule. If the judge uses the literal approach, the words of the statute are given their ordinary and natural literal meaning. An example of this is IRC v Hinchy [1960] AC 748 a taxpayer, Hinchy, had filed an incorrect tax return. Section 25 of the Income Tax Act 1952 (UK) provided that any person who lodged an incorrect tax return was liable to pay "treble the tax which he ought to pay under this Act". ...read more.