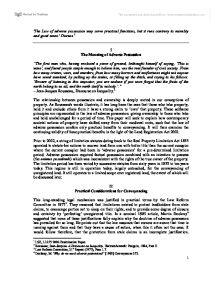 'The Law of adverse possession may serve practical functions, but it runs contrary to morality and good sense.' Discuss.1 I The Meaning of Adverse Possession "The first man who, having enclosed a piece of ground, bethought himself of saying, 'This is mine', and found people simple enough to believe him, was the real founder of civil society. From how many crimes, wars, and murders, from how many horrors and misfortunes might not anyone have saved mankind, by pulling up the stakes, or filling up the ditch, and crying to his fellows: 'Beware of listening to this impostor, you are undone if you once forgot that the fruits of the earth belong to us all, and the earth itself to nobody.'." - Jean-Jacques Rousseau, Discourse on Inequality.2 The relationship between possession and ownership is deeply rooted in our conceptions of property. As Rousseau's words illustrate, it has long been the case that those who take property, hold it and exclude others from it have a strong claim to 'own' that property. These selfsame principles are represented in the law of adverse possession: giving ownership to those who take and hold unchallenged for a period of time. This paper will seek to explain how contemporary societal notions of property have shifted away from their medieval roots, such that the law of adverse possession confers only practical benefits to conveyancing. It will then examine the continuing validity of these practical benefits in the light of the Land Registration Act 2002. ...read more.

Miceli & Sirmans6 point out that the law of adverse possession eliminates old claims to property, thereby reducing transaction costs and facilitating market exchange. Once again, while this is true of unregistered conveyancing, it serves only to complicate and inflate the transaction costs associated with unregistered conveyancing, and so is defeated as a justification by virtue of the dominance of registered land. The most common adverse possession litigation involves boundary disputes. These occur where one party has, by intention or good-faith mistake, occupied a section of their neighbour's land over a boundary. This occupation frequently spans limitation periods and often involves reliance placed on occupation of the disputed land. Since intention and mistake are near impossible to reliably distinguish, the law must operate to deter intention and encourage proper determination of boundaries to minimise mistakes. The economics are straightforward: If A wants to develop property adjoining to property owned by B, they will have an incentive to properly determine the boundary to the efficient point (ie, the value of the development). If there is some error in the survey and A places a sunk investment in a development on property belonging to B, B can then extract an inflated price ('quasi rents') for the property to the extra value of A's reliance. This reliance will only grow over time, so B has no incentive to pursue their claim in a timely fashion. Limitation periods cap this practice. The longer the limitation period, the more incentive A has to properly survey before development (the first-best outcome). ...read more.

Although this negates the practical benefits of reducing stale claims and perfecting title, it does operate to prevent hardship and so creates a fairer system. Furthermore, the existence of a liability rule effects a shift in the economic incentive balance, reducing the optimal limitation period. This in turn will reduce the expense of unregistered conveyancing. The critical disadvantage is that this reduction in the optimal limitation period further undermines security of title under a system of registration. It is partly for this reason that the Law Commission10 introduced an altogether different system in 2002. The Land Registration Act 2002 retains the law of adverse possession for registered land, albeit with a limited scope. The Act prevents the automatic acquisition of title after the limitation period has expired. Those in adverse possession must apply to the Land Registry for title, against which the registered proprietor has two years to contest the claim and bring an ejectment action. Where they do not object, or fail to bring an action within two years, the applicant will be made full proprietor and takes subject only to those interests that have objected to his application. The 2002 Act seems to offer a compromise between security of title and efficient redistribution of land where it has unreasonably fallen out of use. Although the introduction and growth of registration has negated many of the practical justifications for the law of adverse possession, it remains largely due to our centrist moral and political convictions. A move to the left may see expansion of the doctrine whilst a move to the right could effect its extinction. ...read more.