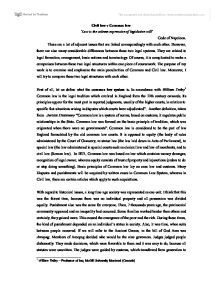 ‘Law is the solemn expression of legislative will’

There are a lot of adjacent issues that are linked correspondingly with each other. However, there are also many considerable differences between these two legal systems. They are related to legal formation, arrangement, basic notions and terminology. Of course, it is complicated to make a comparison between these two legal structures within one pieсe of coursework. The purpose of my work is to examine and emphasize the main peculiarities of Common and Civil law. Moreover, I will try to compare these two legal structures with each other.

First of all, let us define what the common law system is. In accordance with William Tetley[1]Common law is the legal tradition which evolved in England from the 11th century onwards. Its principles appear for the most part in reported judgments, usually of the higher courts, in relation to specific fact situations arising in disputes which courts have adjudicated”.  Another definition, taken from   Juristic Dictionary “Common law is a system of norms, based on customs, it regulates public relationships in the State. Common law was formed on the basic principle of tradition, which was originated when there were no governments”. Common law is considered to be the part of law England formulated by the old common law courts. It is opposed to equity (the body of rules administered by the Court of Chancery, to statue law (the law laid down in Acts of Parliament), to special law (the law administered in special courts such as clerical law and law of merchants, and to civil law (Roman law).  In 1873, Common law was based on law which contains money damages, recognition of legal owner, whereas equity consists of trust of property and injunctions (orders to do or stop doing something). Basic principles of Common law lay on case law and customs. Many Disputes and punishments will be acquired by written cases in Common Law System, whereas in Civil law, there are certain articles which apply to such acquisitions.

With regard to historical issues, a long time ago society was represented as one unit. I think that this was the fairest time, because there was no individual property and all possession was divided equally. Punishment also was the same for everyone. Then, 7 thousands years ago, the patrimonial community appeared and an inequality had occurred. Some families worked harder then others and certainly, they gained more. This caused the emergence of the poor and the rich. During these times, the kind of punishment depended on an individual’s status in society. Also, it was time, when suits between people occurred. If we will refer to the Ancient Greece, in the hill of God Ares was Areopag. Members of Areopag decided who would be the nine governors. Judges judged people dishonestly. They made decisions, which were favorable to them and it was easy to do, because all statutes were unwritten. The judges were guided by customs, which transferred from generation to generation and could be interpreted under different cases. In my opinion, when laws are not written – there is a great space for arbitrariness. Therefore, people required records of these laws. At last, archon Dragon[2]has written down ancient customs, which became the first laws.

Some of them were related to primitive beliefs and now seem ridiculous. For instance, the bull, which has butted a person, was condemned into exile.  Common law was widely distributed in the slave - holding society and during period of feudalisms. This law was represented as notes about several tribes, for example, “Aleman truth” or “Russian truth”.

When written legislation appeared such concepts as injustice and inequality continued their existence.  I want to provide an example from the “Russian truth” (the largest monument of the Russian right, the code of the feudal rights).  Several groups of articles from the “Russian Truth” protect the property of feudal people. For instance, if a slave stole cattle of the noble person, he will be fined. There were also established fines for different kinds of damage, caused for boyars and their property.

In my opinion, all these regulations were very unfair and brutal. They only protected the rights of rich and powerful people, which is absolutely incorrect and unjust. Law must be equal for everyone, and punishment should be the same for every person.

Many years passed before humanity came to the decision to legalize all statutes. Also, one significant feature was the necessity of their acceptance by a representative body (parliament).  In modern law there are no separate rules for the poor and the rich. I think that the rule of law is one of the major achievements of the humanity.

Civil law is considered to be codified law whereas common law is uncodified one. Referring to W. Tetley, civil law may be defined “as that legal tradition which has its origin in Roman law, as codified in the Corpus Juris Civilis of Justinian, and as subsequently developed in Continental Europe and around the world. Civil law eventually divided into two streams: the codified Roman law (as seen in the French Civil Code of 1804 and its progeny and imitators - Continental Europe, Québec and Louisiana being examples); and Roman law (as seen in Scotland and South Africa). Civil law is highly systematized and structured and relies on declarations of broad, general principles, often ignoring the details. According to some historical backgrounds, Civil Law system was established IN 438 BC in Italy by Patricians. Further it was modified by the Emperor Justinian (527- 565 AD). After collapsing of Roman Empire by Greek Troops in 12 century, the Emperor Justinian modified Civil Law by establishing Corpus Civilis[3]. There are three sub traditions of Civil Law system: Roman law, Canon Law and Commercial Law (Code of France de Commerce). Civil law (Roman Law) system was contained Private Law and Public Law. Public Law included public affairs, concerning finance, commerce, and trade. Most of the civil procedures were investigated in Private Law. There were two types of scholars both Praetor and Iudex which investigated the procedure. Hence, Laws were based on Praetor-iudex system. Praetor was a simple servant (magistrates) who was filtering out the cases and evidences. Iudex was ad hoc judge who superseded praetor and also had a power to acquire punishment. Canon Law was based on Church. A main Authority of Canon Law was a Pope. It contained criminal cases which were not included in Roman law. Commercial Law is a law of merchants and traders.

I also want to write a modern definition of the Civil law from Juristic dictionary. “Civil law is a branch of law, norms of which regulate property relations; also it regulates personal non-property relations.”

One of the major sources of the Civil law was the twelve tables. Their rules were comprehensible and these rules were the foundation of the Civil law that we use now.  For instance: the legal aspects and requirements of marriage and divorce; the reciprocal obligation of parent and child; the absolutely despotic paternal authority, the appointment and duties of guardians; the law of intestate succession; the sale and pledge of property.

Of course, the main, but not unique source of modern civil law is constitution. There are also other sources: codes rules and order of Ministry and Department, decision of the local bodies.

In my opinion, in spite of the ancientness of common law, it continues to exist in our present day. For instance, case law, which exists in the UK, is an echo of common law.

The main difference between modern the civil law from the common law is that statutes of civil law are collected in codes. As for common law, it has no such codes, all it’s regulations are collected in cases. So, we can assume the following difference between civil and common law: On a method of formation the codes are usually accepted by representative bodies (parliaments) - supreme legislative bodies. In Uzbekistan it is an Oliy Majlis. In the UK the representative body is Parliament. It is based on two-chamber system: The House of Lords and The House of Commons. Members of House of Commons dispute and vote for the different statutes of national legislation. The House of Lords debate a bill after it has been passed by the House of Commons.

The usual right is based on precedents or ancient norms, which are used in some countries, in our days. Another distinctive feature of civil law, from my point of view, is a universality of civil law. Considering that or other case, the judge applies this or that norm of civil law, based on codes. We cannot say the same thing about the right. If we consider precedent as a version of the usual right, it is possible to say, that civil law, more convenient. I want to emphasize one more distinctive feature of civil law. From my point of view, civil law is more flexible, because it changes often. The representative body can makes changes to the rules of civil law, if it is necessary. However, common law is very ancient and less liable to change.  W. Tetley claims “A civil lawyer usually starts from a legal norm contained in legislation, and by means of deduction makes conclusions regarding the actual case. On the other hand, a lawyer in common law starts with the actual case and compares it with the same or similar legal issues that have been dealt with by courts in previously decided cases, and from these relevant precedents the binding legal rule is determined by means of induction. A consequence of this fundamental difference between the two systems is that lawyers from the civil law countries tend to be more conceptual, while lawyers from the common law countries are considered to be more pragmatic”. In addition common law and civil law have different separation of powers[4]. In some common law countries, judges are seen as balancing the power of the other branches of government whereas in civil judges are considered to be only in legislation branch. Another difference based on legal mythologies. In common law, opinions are much longer and contain elaborate reasoning whereas in civil law opinions are usually very short and formal in nature.

I tried to show that these two legal systems are different. I agree that some rules and concepts of civil and common law are the same. Nevertheless, these two systems represent a completely different approach to the realization of justice. Common law is based on customs, traditions and precedents, while civil law is represented mostly in codes which contain logically connected concepts and rules.

Common law contains millions of cases which have been written since its establishment. For the lawyer it is rather difficult to look at each case and find which one might be appropriate and coincide with the present case, whereas in civil law it is easy to judge those people who have violated laws and investigate their cases by the relevant articles both in civil and criminal matters.

[4] Separation of powers – established by Aristotle and divided into three branches: Executive, Legislative and Judicial Branches