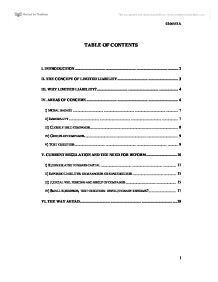 TABLE OF CONTENTS I. INTRODUCTION 2 II. THE CONCEPT OF LIMITED LIABILITY 3 III. WHY LIMITED LIABILITY? 3 IV. AREAS OF CONCERN 3 I) MORAL HAZARD 3 II) IMMORALITY 3 III) CLOSELY HELD COMPANIES 3 IV) GROUPS OF COMPANIES 3 V) TORT CREDITORS 3 V. CURRENT REGULATION AND THE NEED FOR REFORM 3 I) RULES RELATED TO SHARE CAPITAL 3 II) IMPOSING LIABILITIES ON MANAGERS OR SHAREHOLDERS 3 III) JUDICIAL VEIL PIERCING AND GROUP OF COMPANIES 3 IV) SMALL BUSINESSES, TORT CREDITORS: REVOLUTIONARY REFORMS? 3 VI. THE WAY AHEAD 3 I. Introduction The institution of limited liability for companies has typically been regarded as one of the most important innovations of the late industrial revolution period. This view was appropriately expressed by one early commentator, who stated: "The limited liability corporation is the greatest single discovery of modern times... Even steam and electricity are less important than the limited liability company"1. Commentators generally consider that limited liability has been proved a vital instrument in the attainment of economic growth. However, recent analysis of the limited liability principle have questioned its potential advantages and have argued for adoption of a more restrictive approach by the regulation. It is the aim of this paper to analyze the importance of the existence of limited liability companies in the 21st century, as a means of fostering entrepreneurial spirit, and to argue that while the above aim is regarded as essential in the market economy, there is invariably a need for a clear and precise framework through which the principle should apply. The potential abuse of the limited liability principle requires a careful consideration when deciding about the appropriate level of regulation. The guiding principle of competitiveness of UK companies and the emphasis on the construction of a legal system that has an advantageous framework of company law and will allure businesses to it, as evidenced in the Company Law Review: Final Report2, needs to be balanced with the guarantee that sensible prophylactic measures are taken by the legislator to avoid misuse of the principle. ...read more.

In general, the above provisions are methods of ex post regulation of the use of limited liability. While they may have prospective effect, as a way of inducing the persons responsible to monitor the firm's capitalization and efficiency, they offer no significant assistance in cases, where the directors or owners of the companies have already abused the limited liability principle. As Finch points out "the liquidator cannot attack the incompetence or mismanagement that may have brought the company to the verge of the insolvency"53. Thus, the damage has already occurred and very few things can be done to alleviate the detrimental effects on creditors. iii) Judicial veil piercing and group of companies The courts through the application of the "lifting of veil" doctrine have tried to balance the benefits of limited liability against its costs54. The separate legal personality has been disregarded in cases, which involve agency relationship, fraud, tax, trust, enemy, group of companies and tort. While, there has been a modification in the established principle of separate personality in relation to group accounts55, the courts seem unwilling to accept claims for lifting the veil in the group of companies' cases. This reluctance of the courts is often regarded as based on a pro-multinational approach to businesses. As Janet Dine points out "the courts today are more prepared to lift the corporate veil when to do so is to the advantage of the parent company but refuse to do so when it would be to its disadvantage" 56. The situation thus, in this area is still governed by the principle that companies with related shareholdings bear no responsibility for the liabilities of other companies in the group. Nevertheless, there have been some limited, though, exceptions, where the courts disregarded the principle and held member companies liable for debts incurred by other members in the group, apart from the cases where circumstances indicate that the subsidiary is a mere fa�ade. ...read more.

56 Janet Dine, The Governance of Corporate Groups (2000) Cambridge University Press. See DHN Ltd case, where Lrd Denning stated that the corporate veil should be lifted and that the companies were in reality a group and should be treated as one and so compensation was payable, DHN Ltd v. Tower Hamlets (1976) 1 WLR 852 57 "Under English law if the parent company controls the actions of the directors of a subsidiary and their conduct can be regarded as wrongful trading, the parent may be regarded as a "shadow director" and treated as equally responsible" Milman D, n 32 above 58 Milman D., n 32 above 59 See Hicks A., "Corporate form: Questioning the unsung hero" (1997) JBL 306 where, based on the results of the ACCA research "Alternative Company Structures for the Small Business" (Research Report No. 42, 1995), he concludes that limited liability is not the primary reason why small businesses choose to incorporate. 60 Hicks A., n 59 above. 61 Freedman n 24, above. Indeed, the freedom of the creditors and the owners to allot the risks as efficiently as possible in the case of limited liability regime provides a strong argument for the retention of limited liability (Hansmann H. and Kraakman R. n 21 above). See also Halpern, Trebilock and Turnbull, n 16 above, where they advocate the adoption of an unlimited liability regime for closely held companies. 62 Freedman n 24, above 63 EC Directive 89/667 on single member private limited liability companies [1989] O.J. L 395, implemented in UK by S.I. 1992 No. 1669, which introduced inter alia new s. 1 (3A) of the Companies Act 1985. 64 Hansmann H. and Kraakman R. n 21 above, while Pettet argues that the liability insurance against tort claims purchased by the companies is the more efficient solution ( n 17 above). 65 Leebron, n 28 above. See also Cheffins B., n 13 above 66 Company Law Review: Final Report, n 2 above. ?? ?? ?? ?? 0146553A 1 ...read more.