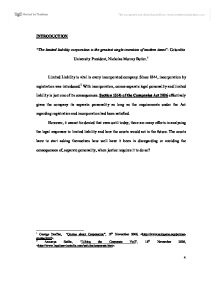 INTRODUCTION "The limited liability corporation is the greatest single invention of modern times"- Columbia University President, Nicholas Murray Butler.1 Limited Liability is vital in every incorporated company. Since 1844, incorporation by registration was introduced.2 With incorporation, comes separate legal personality and limited liability is just one of its consequences. Section 15(4) of the Companies Act 2006 effectively gives the company its separate personality as long as the requirements under the Act regarding registration and incorporation had been satisfied. However, it cannot be denied that even until today, there are many efforts in analysing the legal responses to limited liability and how the courts would act in the future. The courts have to start asking themselves how well have it been in disregarding or avoiding the consequences of, separate personality, when justice requires it to do so? CONSEQUENCES OF LEGAL PERSONALITY AND LIMITED LIABILITY In 1987, English court gave judgment to Salomon v A Salomon and Co Ltd,3 which then became the most important authority when defining separate personality. The House of Lords had also effected the doctrine of limited liability as a result of this case.4 Salomon v Salomon5 Mr. Salomon was originally a sole proprietor, who later sold his business to an incorporated company, 'A Salomon and Co. Ltd'.6 The company later failed and the liquidator sought to ignore the fact that Mr. Salomon had sold his business to a separate person and now enjoy limited liability.7 At first instance, the court held that the company was carrying out business as Mr. Salomon's agent. Thus, Mr. Salomon as a principal would be responsible for the debts incurred by its agent. The Court of Appeal also held that Mr. Salomon would be personally responsible for the company's debts, as he had abused the privileges of incorporation and limited liability. However, the House of Lords had unanimously overturned these decisions and uphold the doctrine of separate personality.8 Only the company will be liable for its own debts and Mr. ...read more.

Hence, it is just that the principals will be responsible for their actions, since they are exercising full control over them. Interest of Justice There were times when the courts specifically stated that lifting is for prevention of injustice.67 For example, in Re a Company,68 it was held that "the court will use its power to pierce the corporate veil if it is necessary to achieve justice."69 However, since Adams,70 courts are not free to displaced limited liability principle jus because it is in the interest of justice.71 It is recommended that this is the situation because courts are not ready to disregard limited liability unless there is very clear evidence of injustice. Besides, it might be that courts are now more concerned about the economy. What it wishes to achieve is to provide the public with a sense of certainty that limited liability will not simply be displaced. If this is successful, there will have more members from the public that are willing to invest by taking comfort that they will enjoy limited liability. Lastly, the courts had allowed Adams to survive in order to prevent the 'floodgates' of litigation. If courts had shown willingness to lift the veil of incorporation, there will have inculpable, unmeritous cases coming before the courts claiming to lift the veil. Thus, it is submitted that in order to prevent this, courts decided to take the stricter approach. Other Legal responses Other than legal responses discuss above, courts are also more reluctant to lift corporate veil when numbers of shareholders in a company increases.72 It is recommended that the smaller the number of shareholders, the higher the chance that a company is acting as a 'puppet' for the members. To lift the veil of a public company is also much more difficult than lifting the veil of a private company.73 This can be justified by economic explanations of limited liability. ...read more.