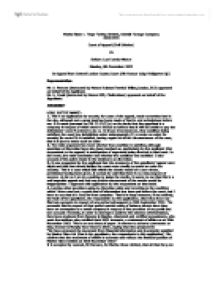 Marine Blast v. Targe Towing Limited, Scheldt Towage Company 2003/1335 Court of Appeal (Civil Division) CA Before: Lord Justice Mance Monday, 8th December 2003 On Appeal from Central London County Court (His Honour Judge Hallgarten QC) Representation Mr. A. Parsons (instructed by Messrs Holman Fenwick Willan,London, EC3) appeared on behalf of the Applicant. Mr. S. Croall (instructed by Messrs BPE, Cheltenham) appeared on behalf of the Appellants. JUDGMENT LORD JUSTICE MANCE: 1. This is an application for security for costs of the appeal, made somewhat late in the day, although not a great deal has been made of that in oral submissions before me. It is made pursuant to CPR 25.13(2)(c) on the basis that the appellant is a company in respect of which there is reason to believe that it will be unable to pay the defendants' costs if ordered to do so. In those circumstances, that condition being satisfied, the court has jurisdiction under subparagraph (1) to make an order for security for costs if it is satisfied, having regard to all the circumstances of the case, that it is just to make such an order. 2. The main argument has been whether that condition is satisfied, although questions of discretion have also been touched on, particularly by the applicant (the respondent to the appeal) ...read more.

7. It is relevant to point out that at least the debt to the VAT authorities and possibly also the loan account will either be preferential or secured. That could mean that in any financial crisis the bank current account was not available. 8. The fact that there is a loan account of 380,000 euros is somewhat puzzling in the light of the recent statement by Mr Radford, the company's solicitor, made on 3rd December 2003, referring to the level of indebtedness that Marine Glass has recently repaid. However, it may be that that means that Marine Glass took out a loan in order to pay off some of the creditors who were shown in previous accounts. That could link up with some of the other points made on the application, namely that Marine Glass has over the years had a number of judgments, all on the face of them quite small, entered against it, which it has allowed to remain on the record. One reason why they may have remained on the record was that they were unsatisfied. There are now documents showing that they have all been paid off but the date of payment off is known only in the case of one of them. ...read more.

One must balance against that the view that I have taken, that there is reason to believe that if the appellant company lost all down the line, it would be unable to pay the costs, and in those circumstances it seems to me that security should be ordered. As to the sum, it is accepted by the applicant that the figure put forward of �54,000 cannot be supported. One must deduct from that an element relating to the cross appeal. One must also leave out of account probably costs of this application. So it would bring the sum down to at least �40,000. It still seems to me, looking at the bill of costs which has been produced, that the costs claimed in respect of the issues arising on this appeal are very much more than I would at present expect and would consider proportionate. That goes amongst other things to the time spent, which may impact on other lump sum items such as brief fees. I must take a rough and ready view of it. The view I have come to is that security should be ordered in the sum of �20,000. ORDER: Security ordered in the sum of �20,000 to be paid within 28 days; if security not paid within 28 days appeal to be dismissed with costs to be assessed; security to be paid into court or by bank guarantee; liberty to apply. ...read more.