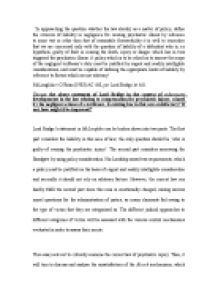 McLoughlin v OBrian [1983] AC 410, per Lord Bridge, at 441. Discuss the above statement of Lord Bridge in the context of subsequent developments in the law relating to compensation for psychiatric injury, caused by the negligent actions of a tortfeasor.

﻿?In approaching the question whether the law should, as a matter of policy, define the criterion of liability in negligence for causing psychiatric illness by reference to some test or other than that of reasonable foreseeability it is well to remember that we are concerned only with the question of liability of a defendant who is, ex hypothesi, guilty of fault in causing the death, injury or danger which has in turn triggered the psychiatric illness. A policy which is to be relied on to narrow the scope of the negligent tortfeasor?s duty must be justified by cogent and readily intelligible considerations, and must be capable of defining the appropriate limits of liability by reference to factors which are not arbitrary?. McLoughlin v O?Brian [1983] AC 410, per Lord Bridge, at 441. Discuss the above statement of Lord Bridge in the context of subsequent developments in the law relating to compensation for psychiatric injury, caused by the negligent actions of a tortfeasor. Is existing law in this area satisfactory? If not, how might it be improved? Lord Bridge?s statement in McLoughlin can be broken down into two parts. The first part considers the liability in this area of law; the only question should be ?who is guilty of causing the psychiatric injury?. The second part considers narrowing the floodgate by using policy consideration. His Lordship raised two requirements, which a policy must be justified on the basis of cogent and readily intelligible consideration and secondly it should not rely on arbitrary factors. However, the current law can hardly fulfil the second part since this area is emotionally charged, raising serious moral questions for the administration of justice, as many claimants fail owing to the type of victim that they are categorised as. The different judicial approaches to different categories of victim will be assessed with the various control mechanisms evaluated in order to assess their merits. ...read more.

For instance, the control mechanism proposed in Alcock would deny a relative who had attempted a rescue, while the mechanisms from White would defeat a claim by the policemen where they had no more than witnessed the event. It is hard to argue with this reasoning, particularly as it is firmly grounded in principle. The thresholds on the current law, such as the requirements of proximity and aftermath have lead to widespread calls and criticisms. Therefore, reform on this area is desirable. A significant aspect of the Commission?s proposals was to remove the second and third mechanisms mainly due to the unjust results they engaged;[40] the first mechanism would be retained in an amended form. In fact, such proposal is very similar to other jurisdictions such as Australia, which has been a pioneer of codifying this area of law. Therefore, a comparison between two jurisdictions might be helpful in determining whether the English Law should adopt the Commission?s proposal. The Australian law of psychiatric illness is now governed by the Law Reform Act 1944.[41] Similarly, the main requirement is that the plaintiff must prove the defendant?s negligence caused him or her to suffer ?mental or nervous shock?.[42] The main difference compare to the current English law is that, instead of having the foreseeability test, the case goes through a statutory formula, which lays down a general rule of liability as an addition to existing rules of liability?.[43] There are several advantages of having a statute replace the common law. For example, the statute allows plaintiffs to recover in cases where it is not possible at common law. If a parent or husband or wife of the person killed, injured or put in peril suffers sock as a result of the accident, they can recover whether or not they were present at the accident or its aftermath.[44] What matters is not how they learnt of the accident, but their relationship to the accident victim. ...read more.