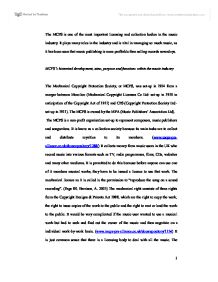 The MCPS is one of the most important licensing and collection bodies in the music industry. It plays many roles in the industry and is vital in managing so much music, as it has been seen that music publishing is more profitable than selling records nowadays. MCPS's historical development, aims, purpose and functions within the music industry The Mechanical Copyright Protection Society, or MCPS, was set-up in 1924 from a merger between Mecolico (Mechanical Copyright Licenses Co Ltd- set-up in 1910 in anticipation of the Copyright Act of 1911) and CPS (Copyright Protection Society Ltd- set-up in 1911). The MCPS is owned by the MPA (Music Publishers' Association Ltd). The MCPS is a non-profit organisation set-up to represent composers, music publishers and songwriters. It is know as a collection society because its main tasks are to collect and distribute royalties to its members. (www.mcps-prs-alliance.co.uk/docsrepository/1288/) It collects money from music users in the UK who record music into various formats such as TV, radio programmes, films, CDs, websites and many other mediums. It is permitted to do this because before anyone can use one of it members musical works, they have to be issued a licence to use that work. The mechanical licence as it is called is the permission to "reproduce the song on a sound recording". ...read more.

The members of the MCPS don't pass the rights of their music to the MCPS, but their membership agreement states that the MCPS will be the agent in managing and administering the mechanical copyright in the UK. The MCPS has agreements with foreign countries collection societies, like the Harry Fox Agency in the USA, to collect money on MCPS's behalf. Because there are so many mediums in which music can be recorded and offered for use, the MCPS can "act in many different ways according to the authority given to it by its members". (www.mcps-prs-alliance.co.uk/docsrepository/421/) The MCPS can act as the sole negotiator, licensing record companies and online music retailers. It can also grant licences where the member has given specific instructions for music used in videos/DVDs, television and radio advertisements, etc. (www.mcps-prs-alliance.co.uk/docsrepository/421/) Not all songwriters make their money from mechanical royalties. Many songwriters and composers write only for film, adverts and computer games so the MCPS can grant synchronisation licences, which allow music to be synchronised with visual images, on instruction from the member. (Page 83 Harrison, A. 2003) The MCPS issues different types of licences to different types of mediums and there are different royalty rates for each. Some, like premium audio products, are usually determined on an individual basis. Others like retail video and DVD video are more standardised. ...read more.

Therefore the MCPS and PRS have now made it easy to clear them both in a simple, one-step process. Relevant contemporary issues the MCPS is involved in Mobile ring tones have taken the industry by storm, providing a new source of income to an ailing industry. Now the industry, in partnership with the mobile phone industry, has come up with a new option for mobile phone users. As with ring tones, where as one can choose what type of music is going to be played when a call comes through, they have now come up with the Mobile Ringback tones. "A Ringback tone is the sound a caller hears whilst they wait for the recipient of the call to answer. It replaces the traditional ringing sound with the chosen music. The consumer chooses the individual tones they want others to hear when they dial their number. The ringback service does not involve the download of a permanent copy to the mobile phone." (www.mcps-prs-alliance.co.uk) The MCPS and the PRS have approved the joint licensing of this new type of medium. They are now also making the move to make it easier for potential providers of this service to go ahead and offer this service, which undoubtedly will be another source of revenue for its members. The MCPS is a vital body in the music industry and composers, songwriters and music publishers are definitely better off with it other than having to deal with music users on an individual basis. ...read more.