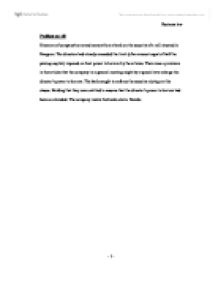 Problem no: 68 Directors of company borrowed money from a bank on the security of a mill situated in Rangoon. The directors had already exceeded the limit (of an amount equal of half the paid-up capital) imposed on their power to borrow by the articles. There was a provision in the articles that the company in a general meeting might by a special vote enlarge the director's power to borrow. The bank sought to enforce the security relying on this clause. Holding that they were entitled to assume that the director's power to borrow had been so extended. The company resists the banks claim. Decide. Law Memorandum of association One of the first steps in the formation of a company is to prepares a document called the Memorandum of association .The Memorandum of association of a company contains the fundamental conditions upon which alone the company has been incorporated. According to section 2(28) of the Company ACT 1956," Memorandum" means "Memorandum of association of a company as originally framed or altered from time to time in pursuance of any provision of company law or of its act". It contains the objects for which the company is formed and therefore identifies the possible scope of its operation beyond which its action cannot go. Ultra Vires Any transaction, which is outside the scope of the powers specified in the objects clause and are not reasonable incidentally or necessary to the attainment of objects is ultra-vires the company and therefore void. ...read more.

Which concerns the case where the company has exceeded its limit o of borrowing. In case where the borrowing has been effected exceeding an amount more than half of the paid up share capital the lender may not be able to enforce the loan against the company, unless he can prove that he advanced the loan in good faith and without knowledge that the limit had been exceeded. But in the case the bank knows it very well that the company has exceeded it's limit. How ever the bank can claim that it had assumed that the powers of the director to borrow had been enlarged through a general meeting. For example in joint receivers and managers of Nilton Carson ltd v Hawthorne. The hotel premises of the company were handed over to a director of the company under lease granted by the managing director without the approval of the shareholders. The lessee director had acted with complete honesty and with agreement of practically all the shareholders who desired that she should run the community home independently of the company. The transaction was held to be not voidable without showing that there was no proper consideration. Doctrine of constructive notice(memorandum and articles) After a company's registration the memorandum and articles of association become public documents and they can be inspected by any one on payment of a prescribed fee. As such it is taken for granted that every one who deals with the company has read and understood the contents of these documents. ...read more.

Representation through articles: This exception deals with the most controversial and highly confusing aspect of the "turquand" rule. Articles of association generally contain what is called the power of delegation. LAKSHMI RATTAN LAL COTTON MILLS V J K JUTE MILLS CO Explains the meaning and effect of a "delegation clause". One G was a director of a company the company had managing agency of which also G was director. Articles authorized directors to borrow money and also empowered them to delegate this power to any or more of them .G borrowed a sum of money from the plaintiffs. The company refuses to be bound by the loan on the ground that there was no resolution of the board delegating the power to borrow to G. yet the company was bound by the loan. Even supposing that there was no actual resolution authorizing g to enter into the transaction, the plaintiff could assume that power, which could have been delegated under the articles, must have been actually conferred. The actual delegation being a matter of internal management, the plaintiff was not bound to enter into that" Hence, even in the case the bank could have assumed that the company through a general meeting had actually extended the directors power to borrow powers. Conclusion: The bank in the case has knowledge of the articles of the company under which the director's power to borrow can be extended. Also according to the doctrine of indoor management and the "turquand rule" the company can take the stand that the bank is entitled to assume that the necessary meeting was held and that the directors powers to borrow had been extended. ...read more.