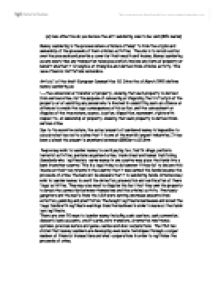 (a) how effective do you believe the anti laundering laws to be; and (80% marks) Money laundering is the process where criminals attempt to hide the origins and ownership of the proceeds of their criminal activities. The aim is to retain control over the proceeds and provide a cover for their wealth and income. Money laundering occurs every time any transaction takes place which involves any form of property or benefit whether it is tangible or intangible and derived from criminal activity. This leave financial institutions vulnerable. Article 1 of the draft European Communities EC Directive of March 1990 defines money laundering as: '......the conversion or transfer of property, knowing that such property is derived from serious crime, for the purpose of concealing or disguising the illicit origin of the property or of assisting any person who is involved in committing such an offence or offences to evade the legal consequences of his action, and the concealment or disguise of the true nature, source, location, disposition, movement, rights with respect to, or ownership of property, knowing that such property is derived from serious crime. Due to its secretive nature, the actual amount of laundered money is impossible to calculate but has led to claims that it is one of the world's largest industries. It has been claimed the amount is anywhere between $500bn to $1.5trn People may wish to launder money to avoid paying tax, traffic drugs, perform terrorist activities, perform organised crime, trade fraud and human trafficking. Somebody who legitimately earns money in one country may place the funds into a bank in another country. This is a legal thing to do however if they fail to declare this income on their tax returns in the country that it was earned the funds become the proceeds of crime. The bank will be unaware that it is laundering funds. Criminals may wish to launder money to avoid the detection, prosecution and confiscation of there illegal activities. ...read more.

The Act repealed all previous money laundering legislation, except the money laundering provisions in the Terrorism Act 2000 and Anti-terrorism, Crime and Security Act 2000, and consolidates it into Part 7 of the Crime Act. The Crime Act was also an expansion to make it truly 'all crimes' legislation and also covered the requirements of the Second EU Directive. The Crime Act has been amended by the Serious Organised Crime And Police Act 2005. Section 327 makes it a offence to conceal, disguise or remove criminal property. Section 328 makes it a offence to be involved in a arrangement that facilitates the retention, use or control of criminal property. Section 329 makes it a offence to acquire, use or have possession of criminal property. The Serious Crime Act 2007 was an amendment of the Proceeds of Crime Act 2002. The act abolished the Assets Recovery Agency and transferred its powers and obligations to the Serious Organised Crime Agency in April 2008 The Money Laundering Regulations 2007 implement the EC Third Money Laundering Directive in the UK. The 2007 regulations require businesses to have in place checks and controls to prevent money laundering, appoint a nominated person to consider internal suspicions and report them to SOCA and to have in place procedure to identify a customer's identify before entering into a business relationship. The Financial Services and Markets Act 2000 has been very effective against money laundering as it gave the FSA a very important tool in to fight money laundering. Part XI of FSMA 2000 gave the FSA extensive investigatory powers. The FSA has the power to request information from firms, to appoint investigators to ask for the assistance of foreign financial regulators and to give the appointed investigators additional powers. The FSA used these powers when it investigates Northern Ireland Insurance Brokers Limited to determine whether funds had been laundered through the firm. ...read more.

where the disclosure is made by the express or implied consent of the customer. After Tournier v National Provincial and Union Bank of England the concept of bank confidentiality was central to the bank- customer relationship. A duty of confidentiality is owed to the customer by the bank and begins when the customer makes contact with the bank. However as stated in Tournier this obligation is not absolute and is subject to the four qualifications mentioned. A bank can be compelled to release a customer's information if a Act of Parliament compels it to. The major legislation is as follows: The Banking Act 1979 sets out restrictions on the release of information without consent. The Taxes Management Act 1970 which compels banks to notify the Inland Revenue of customers accounts which are credited with interest about a certain amount. There are also Money laundering legislation which orders a bank to notify the authorities if money laundering is suspected. Under the Proceeds of Crime Act 2002 and amended by the Serious Crime Act 2007 a bank must disclose suspicions transactions to the Serious Organised Crime Agency. It is then a offence to tip off the customer that a disclosure has been made. The second exception is a duty to disclose information where such disclosure would be in the public interest. This duty is rarely exercised as the many Acts of Parliament created cover most instances where information would be disclosed in the public interest. However the duty still exists in time of war if the bank had knowledge of a customer trading with a enemy state. The third exception is where it is in the banks interest to disclose information. When a bank wishes to sue a customer for unpaid debts it must disclose information in trying to obtain that debt back. A common practice is sharing information about the accounts through Credit Reference Agencies. In addition banks now pass details to the subsidiary companies to attempt to sell other goods. The fourth exception is where the bank has given express or implied consent. The bank may then pass information to third parties. ...read more.