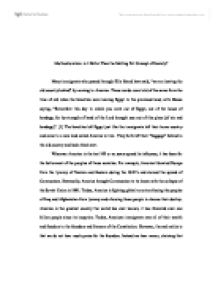 Multiculture is it better

Multiculturalism: is it Better Than the Melting Pot Concept of Society? Many immigrants who passed through Ellis Island have said, "we are leaving the old country behind" by coming to America. Those words were told of the same from the time of old when the Israelites were leaving Egypt to the promised land, with Moses saying, "Remember this day in which you went out of Egypt, out of the house of bondage; for by strength of hand of the Lord brought you out of this place [of sin and bondage]". [1] The Israelites left Egypt just like the immigrants left their home country and came to a new land called America to live. They both left their "baggage" behind in the old country and had a fresh start. Wherever America in the last 100 or so years spread its influence, it has been for the betterment of the peoples of those societies. For example, America liberated Europe from the tyranny of Nazism and fascism during the 1940's and slowed the spread of Communism. Eventually, America brought Communism to its knees with the collapse of the Soviet Union in 1991. Today, America is fighting global terrorism freeing the peoples of Iraq and Afghanistan from tyranny and allowing those people to choose their destiny. America is the greatest country the world has ever known; it has liberated over one billion people since its inception. Today, American immigrants owe all of their wealth and freedom to the founders and framers of the Constitution. However, the sad reality is that we do not hear much praise for the founders. Instead we hear rancor, claiming that they were a bunch of slave-owning, war-mongering lunatics and as such, they brought a Christian culture of dominance which allowed for the oppression of woman, minorities, especially blacks and Hispanics, and other voiceless victims. Should we be surprised when we see a large body of immigrants not assimilating into the American culture? ...read more.

and then enlarge their broad-mindedness into a sweeping synthesis that says not only that one Christian sect is just as good as another, but even that one world-religion is just as good as another." [25] Precisely this one world religion with a moral relativism is what Multiculturalism has to offer. If Multiculturalism has its way, Christianity as America knows it will be lost along with it is the uniqueness in distinction that separates it from all other religions in the world. More to the point, the founders who wrote the Declaration of Independence paraphrased Saint Paul's ministry in the 1st Century saying, "For there is not distinction between Jew and Greek, for the same Lord is over all" is rich to all who call upon Him. [26] Furthermore, there "is no partiality with God," that we are all 'sinners' men and women. [27] Moreover in Protestant Christianity is where "women" are elevated to the level of "men". We could examine an incident in whereby Jesus was confronted with a woman that was to be executed by stoning, because she had committed adultery. The Jewish men dragged her to Jesus and was about to execute her and Jesus replied by writing on the sand and not replying with a word, and when He was done He told them whoever is without Sin may cast the first stone and the men knowing their own failures left one by one starting with the old. [28] Other religions do not offer the same freedom to its citizens as that of Protestant Christianity. For example Canada with its most advanced Multicultural city of Toronto has trouble with the Sharia law of the Islamic faith. Islam is a rigid religion that does not observe equality for all and especially for women and minorities. Today Canadian women are being pulled apart with the decision of either adhering to their religion or abiding by the civic courts of Canada, which is much fairer, and balanced. ...read more.

Soon after, the Executive branch and Legislative branch and the will of the American people have been subservient to the rulings of five imperious justices, along with numerous lower court judges, who continue to issue their decrees beyond the reach of any authority. As in the recent ruling of the pulling of the feeding tube of Terri Schiavo in Florida. One lower court judge had more power than the President, both houses of Congress, and the governor of Florida to execute by starvation of an innocent woman. This type of incident is exactly what Jefferson warned us about (albeit he wrote this over a hundred years ago, but it still has relevancy), in fact, this vexed him so much that in 1819 he was still troubled by this that he wrote: "The Constitution ... is a mere thing of wax in the hands of the judiciary which they may twist and shape into any form they please. It has long been my opinion, and I have never shrunk from its expression ... that the germ of dissolution of our federal government is in the constitution of the federal Judiciary; working like gravity by night and by day, gaining a little today and a little tomorrow and advancing its noiseless step like a thief, over the field of jurisdiction, until all shall be usurped." [50] And that is not all in 1823 just three years before his death, he not only predicted the rise of an imperious court, but by then Jefferson observed it firsthand and he said with this, "At the establishment of our Constitution, the judiciary bodies were supposed to be the most helpless and harmless members of the government. Experience, however, soon showed in what way they were to become the most dangerous,...." [51] Nonetheless, the beat goes on. As we speak, the Supreme Court is debating whether or not to permit the Ten Commandments to be displayed in public buildings and elsewhere on public property. Of course, the nine Justices sit every day in the Supreme Court Building that is adorned by three depictions of the Ten Commandments. ...read more.