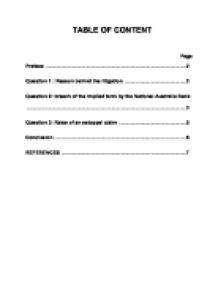 Narni Pty Ltd v National Australia Bank Limited. This paper examines the agreement by conduct to extend overdraft limit and whether an implied term not to terminate the account without notice exists.

TABLE OF CONTENT Page Preface 2 Question 1 : Reason behind the litigation 2 Question 2: breach of the implied term by the National Australia Bank 3 Question 3: Raise of an estoppel claim 5 Conclusion 6 REFERENCES 7 Narni Pty Ltd v National Australia Bank Limited Preface: This paper examines the agreement by conduct to extend overdraft limit and whether an implied term not to terminate the account without notice exists. The relevant case is Narni Pty Ltd v National Australia Bank Limited [1998] VSC 146. The following sections are going to address the three matters based on the reading of the case. 1. Question 1: Reason behind the litigation Before answering this question, it is essential to recall the case that leads to the litigation by Narni Pty Ltd. The appellant's business was a nursing home set up in 1987 and all of the business premises were financed by borrowings from direct loans or indirect responsibilities to its shareholders. The pricipal shareholders and directors were registered nurses, Narni McCarthy and her sister Norma Caringal. Due to the cash flow problems, Mrs McCarthy frequently contacted with Clem Kealy, the manager of the Elwood branch of the Bank for an overdraft. ...read more.

However, the account remained substantially over the approved limit until the May cycle commenced and at the end of the May cycle, the account was $100,000 over this limit. It is noticed that there was no evidence of any specific warning of dishonour after that recorded by the manager on 31 March. Therefore, it was concluded that the Bank continued to permit the company to overdraw the cheques till the date of termination without any warning in writing. The practice of the Bank in 1989 shows that the silence by the Bank meant the cheques were being honoured and this action would be reflected in the periodic bank statements by debiting the overdraft service fees and applicable interests where the account was overdrawn. Moreover, in the document signed by the director of Narni on 6 November 1987 when the account was opened with the Bank, there was the term of the contract that in case of termination, the Bank would give immediate notice in writing. As a matter of law, it was an implied term of the arrangement that the Bank could not terminate or vary it without giving the customer reasonable notice so as to allow time for it to arrange its affairs to comply. ...read more.

The argument used by Narni was that because of the Bak's conduct, Narni was misled that they were able to overdraw cheques in excess of the limit. However, at the time when the Bank ceased to do business with the company, Narni was in surprise as they were not informed clearly about the decision of account termination. The conclusion by the court was that, these states of affairs were clear to both parties and the breach of the arrangement between the Bank and its customer estopps the Bank from denying the cheques repayment on the ground that the balance of the account exceeded the approved overdraft limit of $65,000. Conclusion It was apparent that the National Australia Bank breached the implied term of the arrangement between it and Narni Pty Ltd by dishonouring a numbers of cheques without having given reasonable notice. The conduct led to the failure of Narni's business and the business was forced to be liquidated by the debenture holder. The case was brought by Narni for seeking adequate compensation from the defendant bank. However, it was held by the court that Narni, upon the receipt of the proceeds if the sale of the business, has suffered no further compensable loss, and the action by Narni was in truth seeking double compensation which was unsuccessful thereafter. ...read more.