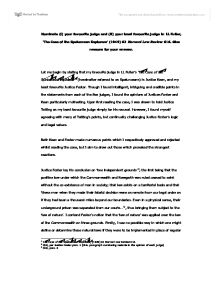 Nominate (i) your favourite judge and (ii) your least favourite judge in LL Fuller, The Case of the Speluncean Explorers (1949) 62 Harvard Law Review 616. Give reasons for your answer.

Nominate (i) your favourite judge and (ii) your least favourite judge in LL Fuller, 'The Case of the Speluncean Explorers' (1949) 62 Harvard Law Review 616. Give reasons for your answer. Let me begin by stating that my favourite judge in LL Fuller's 'The Case of the Speluncean Explorers'1 (hereinafter referred to as Spelunceans) is Justice Keen, and my least favourite Justice Foster. Though I found intelligent, intriguing and credible points in the statements from each of the five judges, I found the opinions of Justices Foster and Keen particularly motivating. Upon first reading the case, I was drawn to hold Justice Tatting as my least favourite judge simply for his recusal. However, I found myself agreeing with many of Tatting's points, but continually challenging Justice Foster's logic and legal values. Both Keen and Foster made numerous points which I respectively approved and rejected whilst reading the case, but I aim to draw out those which provoked the strongest reactions. Justice Foster lay his conclusion on 'two independent grounds'2, the first being that the positive law under which the Commonwealth and Newgarth was ruled ceased to exist without the co-existance of men in society; that law exists on a territorial basis and that 'these men when they made their fateful decision were as remote from our legal order as if they had been a thousand miles beyond our boundaries. ...read more.

I believe that the weakest of Foster's ideas lies in the example of Fehler v Neegas, where the word 'not' was 'transposed from its intended position in the final and most crucial section of the act'10. Surely the word 'not' can change the meaning of any phrase, sentence or statute to an entirely conflicting, even ridiculous, principle: 'Whoever shall wilfully take the life of another shall not be punished by death'; 'Whoever shall not wilfully take the life of another shall be punished by death'. The suggestion that the same effect ought to be carried out in Spelunceans appears entirely ludicrous, particularly due to Foster's choice of example. I believe the lines 'I know you lawyers can with ease, Twist words and meanings as you please'11 suitably sum up Foster's intent. Foster also draws on the ultilitarianist idea of sacrifice, emphasising the ratio of lives taken in attempting to rescue the explorers - he asks 'If it was proper that these ten lives should be sacrificed to save the lives of five imprisoned explorers, why then are we told it was wrong for these explorers to carry out an arrangement which would save four lives at the cost of one?' Whilst I agree with the moral principle of this argument, as many would, I cannot ignore the fact that there was no lack of opportunity to avoid Whetmore's murder. ...read more.

it?'20 The simplicity with which Keen illustrates the three steps of the process of judicial reform highlights the force of his argument to great effect. I admire the way in which Keen presents his opinion. Throughout his argument he attacks the problem in his position as a judge, focusing on what is required from his role, defining the key issues and applying the statute directly. From the beginning of his opinion, Keen pounces on the mistakes of his colleagues, arguing that 'the difficulties...all trace back to a single source...a failure to distinguish the legal from the moral aspects of this case'21. Keen's statements immediately bring home the real issue raised by Spelunceans: 'Primarily, such a statute reflects a deeply-felt human conviction that murder is wrong and that something should be done to the man who commits it'22. In addition, Keen manages to avoid tediousness by incorporating simple, yet sharp examples, such as the story of a man who ate his own shoes23. Justice Keen appears honest and focused on his contractual obligation as a judge. The admission that in his 'capacity as a private citizen', he 'would pardon these men altogether, since...they have already suffered enough to pay for any offence they have committed'24 reveals his understanding of, and affinity with, the opinion of the public. Yet he is fully aware of the 'legal and governmental order I am sworn to administer'. ...read more.