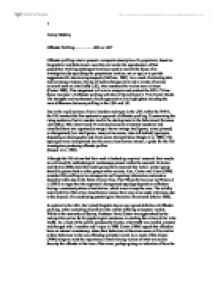 Aneeq Mushtaq Offender Profiling...............USA or UK? Offender profiling aims to present a composite description of a perpetrator, based on biographical and behavioural cues that can lead to the apprehension of that perpetrator. Profiling techniques have been used to narrow the focus of an investigation (by specifying the perpetrators location, sex or age) or to provide suggestions for interviewing suspects (McCann, 1992). As a result of collecting data and analysing evidence, the use of such techniques have led to arrests of serious criminals such as John Duffy (UK), who murdered his victims near railways (Canter 1989). This assignment will aim to compare and contrast the FBI's 'Crime Scene Analysis' of offender profiling with that of David Canter's 'Five Factor Model. The strengths and weaknesses of each approach will be highlighted including the main differences between profiling in the USA and UK. Due to the rapid increase of serial murders and rapes in the USA within the 1970's, the FBI invented the first systematic approach of offender profiling. Counteracting the rising numbers of serial murders lead to the development to the Behavioural Sciences Unit (BSU). BSU interviewed 36 convicted sexually orientated murderers and classified them into organised (average / above average intelligence, crime planned) or disorganised (low intelligence, messy crime scene, clues left behind) typologies, depending on demographic and crime scene characteristics (Burger et al, 1986). ...read more.

The principal foundation of the FBI system is situated within the organised and disorganised offender dichotomy (Geberth, 1996). For example, It sees the organised offender as socially competent, living with partner and having average to above average intelligence. The unorganised offender on the other hand is seen to be socially inadequate, living alone and having a below average intelligence. Other individuals are also highly critical of the FBI's methods. Holmes and DeBurger (1988) argue that federal agencies like the FBI have minimal experience in investigating murder cases, opting rather to suggest that it would be better for local agencies to train their own officers in the particulars of such investigations. A criticism of the FBI could also be that there could be instances where an organised offender may eventually leave a disorganised crime scene (Turvey, 1999). These offenders could be acting out in retaliation, domestic violence related offenders or because they are not mentally well at the time of the crime i.e. depression (Turvey, 1999). This would lead to analysts to incorrectly provide the characteristics of one group of offenders as the profile, when in actual fact, the offender possesses the characteristic of another group, if a group at all, as in some instances, it may not be possible to place people into categories for example, almost everyone experiences some from depression and can do things that they would not have done if they were not experiencing depression but this does not necessarily mean that their characteristics will change. ...read more.

It maybe argued that unlike David Canters (British) approach in which implement a scientific methodology and statistical profiling, the FBI do not validate their theories and beliefs, on the contrary, opting to use methods that are subjective rather then objective and nor was any statistical test performed to establish the validity the validity of their conclusions. Additionally, the use of a sample consisting of 36 people is to unrepresentative and applying to results and findings to a wider population can be extremely difficult. This can lead to profiles being developed where the suspected offenders characteristics are being placed to fit, even though they would not fit the profile. Nonetheless, statistical processes such as those of David Canter may have their weaknesses, they are at lest clear and unambiguous, allowing other researchers to replicate studies in order to test hypothesis and or developing competing hypothesis. The use of profiling is questionable in the court of law and many legal systems will not recognise a profiler as an expert witness. This has led Alison et al (2003) to recommend that profiling be treated with extreme caution in criminal investigation and should not be used as evidence in the courts until research has proven its predictive validity. In conclusion, it maybe relevant to point out that the use of profiling does have merit in certain cases although more research and investigations are needed to validate its continued use and the profiling appears unclear as this happens. ...read more.