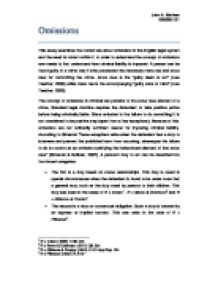 Omissions in UK criminal law. The concept of omissions in criminal law pertains to the actus reus element of a crime. Standard legal doctrine requires the defendant to take positive action before being criminally liable.

Omissions This essay examines the current law about omissions in the English legal system and the need for reform within it. In order to understand the concept of omissions one needs to first understand how criminal liability is imposed. A person can be found guilty of a crime only if s/he possessed the necessary mens rea and actus reus for committing the crime. Actus reus is the "guilty deed or act" (Law Teacher, 2009) while mens rea is the accompanying "guilty state of mind" (Law Teacher, 2009). The concept of omissions in criminal law pertains to the actus reus element of a crime. Standard legal doctrine requires the defendant to take positive action before being criminally liable. Since omission is the failure to do something it is not considered to be positive step (apart from a few exceptions). Because of this, omissions are not ordinarily sufficient reason for imposing criminal liability. According to Simester "these exceptions arise when the defendant has a duty to intervene and prevent the prohibited harm from occurring, whereupon his failure to do so counts as an omission satisfying that behavioural element of that actus reus" (Simester & Sullivan, 2007). A person's duty to act can be classified into four broad categories: * The first is a duty based on status relationships. This duty is owed in special circumstances when the defendant is found to be under more that a general duty, such as the duty owed by parents to their children. ...read more.

However one can also use a utilitarian argument that "if the enforcement of sanctions for violations of law exerts any influence on human behaviour, the imposition of liability for failure to avert harm that one has not caused can have a net effect of reduced harm" (Husak, 1980). Such a utilitarian argument was in the case of R v Stone & Dobinson7. Stone and his mistress had agreed to care for his sister who was suffering from anorexia. Her health deteriorated and she died. One can be argue that Stone and his mistress should be given autonomy to make their own decisions and go about their own business without interfering in the life of his sister. However if medical help had been sought for Stone's sister no one would have suffered great harm. Seeking medical help would therefore have produced a net effect of reduced harm. So, the question remains whether limiting the scope of liability for omissions on the principle of safeguarding autonomy is valid/ socially useful. It is important to safeguard individual autonomy since that is what liberal western democracies are about. Giving people the choice to control their destiny and our duty to others are both important for promoting general welfare. Therefore, in my opinion the current law maintains a reasonable balance between people exercising their judgement and taking decisions and their duty to others around them. ...read more.

The inability to make such a distinction has social implications. It affects the accused is treated and significantly reduces job prospects. Therefore implementing a wider scope of liability to omissions could lead to unfair labelling. A further problem that arises from trying to establish liability for omissions is the difficulty in proving causality. Causation by omission can be denied since causation usually involves a physical action and therefore cases of causation by omission are not genuinely causal (Pundik, 2006). However, it can be argued that laws in omissions are causal factors, a form of quasi-causation, since although there is a lack of physical interaction in causing the act, the prevention of committing an act caused the consequence. Therefore, the law on omissions is broadly satisfactory. It tries to maintain a delicate balance between personal autonomy, morality and punishing people when they fail to perform a duty. However, more can be done in order to incorporate the continental ideology of 'easy rescue'. This will extend the law to reflect the way society has changed. Although our ideas on the importance of human life have not changed, we need changes because of the way we now live. When fundamental interests are involved (life, physical integrity), we should pause to reflect before accepting that an individual's freedom of action is more valuable than a requirement to carry out a non-burdensome rescue (Menlowe, 1993). ...read more.