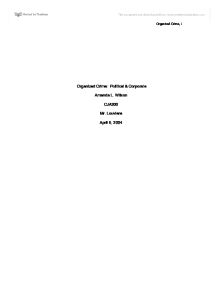 Organized Crime: Political & Corporate Amanda L. Wilson CJA300 Mr. Louviere April 6, 2004 There has been a relationship between organized crime and the political and corporate world since organized crime began. These relationship has served a purpose for all and in a sense is looked upon as a normal way of "doing business". Organized crime is not likely to go away in the political and corporate world. This is a relationship that feeds off of each other for the rights to the one thing the world is searching for: money and power. The year 2002 was one of the biggest years yet for corporate scandal. Corporations were at an all time high for corruption. The fine line between organized and the corporation is being blurred. Enron was one of the big corporate players until the corruption became public in 2002. Enron was a large energy company that was caught raising profits and hiding debts that came to the total of more than $1 billion dollars. ...read more.

Some of the classic cases of politics and organized crime working as one include State Senator Frank Mazzei, Anthony Grosso, Mayor of Chester, PA., and the court system in Reading, PA. In the case of State Senator Frank Mazzei it was shown that him as well as the Lackawanna County Democratic Chairman Patrick Cummings had a series of organized crime figures giving kickbacks for state contracts, extortion, liquor licensing, and bail bond reform legislation. Anthony Grosso was a Pittsburgh bookmaker who made payoffs to the city's district attorney, an alderman, and a constable. The mayor of Chest, PA. And the chief of police were both linked to organized crime member Frank Miller's huge southeastern Pennsylvania gambling network. In Reading, PA. Organized crime networks has established a case-fixing system where they actually set a price list for the dismissal of cases. (Lyman & Potter, 2004) There is estimates that since the 1960s organized crime has given at least $2 billion dollars annually to public officials. ...read more.

Organized crime seeks to find legitimate ways to invest and make money. These investments can also help to conceal other profits which makes way for money laundering and other illegal practices. Many organized crime members seek to open a "legitimate business" that they can claim their profits from. These business can include anything from a hot dog stand, restaurant, or automotive dealership. The business community actually "embraces" these practice because of a few reasons. Organized crime groups provide stolen goods for resale, businesses can use the racketeering services of organized crime to harass competitors and/or secure contracts with employees. The business world assist organized crime and in turn organized crime assist the business world. In conclusion, It seems that after looking at organized crime in the political and business sense it is not necessarily organized crime that causes the corruption. There is a need for corruption by both parties in order to gain power and money. This need or want feeds off of each other in a mutual relationship which provides exactly what they other wanted. Without one there is not another. ...read more.