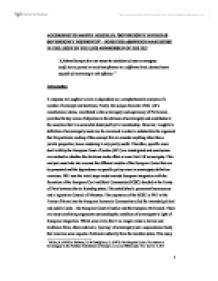 ACCORDING TO MARTIN LOUGHLIN, "SOVEREIGNTY DIVIDED IS SOVEREIGNTY DESTROYED" - DOES THIS ASSERTION MAKE SENSE IN THE LIGHT OF THE UK'S MEMBERSHIP OF THE EU? 'A federal Europe does not mean the abolition of state sovereignty itself, but its partial or total transference to a different level, deemed more capable of exercising it with efficacy.'1 Introduction A response to Loughlin's claim is dependent on a comphrehensive analysis of a number of concepts and doctrines. Firstly, the unique character of the UK's constitutional status, manifested in the sovereignty and supremacy of Parliament, provides the key areas of objection to the division of sovereignty and contributes to the assertion that it is somewhat destroyed by EU membership. However, Loughlin's definition of sovererignty must also be examined in order to substantiate the argument that his particular reading of the concept fails to consider anything other than a juristic perpective, hence rendering it only partly useful. Therefore, specific cases dealt with by the European Court of Justice (ECJ) are investigated and conclusions are reached as whether the decisions made affect or even limit UK sovereignty. This analysis must take into account the different models of the European Union that can be presented and the dependence on specific policy areas in sovereignty definition exercises. 1951 saw the initial steps made towards European integration with the formation of the European Coal and Steel Community (ECSC) decided at the Treaty of Paris between the six founding states. This established a permanent bureaucracy and a legislative Council of Ministers. The expansion of the ECSC in 1957 at the Treaty of Rome into the European Economic Community called for extended political and judicial units - the European Court of Justice and the European Parliament. There are many conflicting arguments surrounding the condition of sovereignty in light of European integration. Whilst some claim that it no longer exists in its true and traditional form, others indicate a 'pooling' of sovereignty into a supranational body that removes some aspects of ultimate authority from the member-states. ...read more.

The former 'establishes criteria for identifying which rules are valid members of the legal system maintained by the legal officials whole roles are regulated by rules of adjudication and rules of change'18, acknowledgment of the validity and supremacy of Parliamentary acts and the validity of their application by the judiciary. The aforementioned rule of change is purposeful in the indication of the law-making bodies that hold the power to change the law, hence it 'concerns Parliament's power of change... According to the doctrine in question this is a power conferred by common law, the power being unrestricted'19. If it is accepted that this principle of Parliamentary Sovereignty both recognises those with authority to make and enforce law and allows for changes made to be endowed with the same legitimacy, then the adoption of the European Communities Act 1972 allowed European legislation to override the British constitution in selected areas - initially those concerned with trade and industry. MacCormick upholds that 'the 1972 Act made a valid change in the rule of recognition, as it purported to do, but with the implied condition that Parliament retained its power to reverse the change'20, so although the UK now recognised an external legislative body, future Parliaments were not bound by this change as the second rule is reserved; 'there is an implicit condition that it could repeal section 2(1) and 2(4) [the sections that recognize and give supremacy to European Community legal obligations] if in the future it should choose to do so.'21. In theory, therefore, sovereignty is not destroyed, even if it has been divided. It is the practical limitations, however, that constrain the future Parliaments and MacCormick describes how these take the form of legal or political restrictions. Limitations It is the Factortame v Minister of Transport22 case that fully exemplifies the challenges presented to the UK by the 'special kind of new legal order'23 that has arisen out of Community law and demonstrates the 'profound constitutional consequences'24 of such a decision. ...read more.

Although it is true that certain policy considerations make withdrawal difficult, states are not prohibited from withdrawing and Jackson posits that to couch sovereignty in fiscal language confuses the concept. Instead, it would be preferable to discuss 'the difficulties that independent governments face in trying to pursue nationalist economic policies in a rapidly integrating global economy'49. Jackson's defence of sovereignty as a status and not as a resource contributes to the comprehension that the UK has not blindly handed away centuries of independence. Instead, careful considerations have been made that allow the UK to 'participate and to engage in relations and to make agreements with other sovereign states'50. Conclusions The traditional Dicean view of British parliamentary sovereignty, upon which Loughlin builds his understanding, fails spectacularly to accommodate for the partial, and very specific, surrender of sovereignty to the EU. It is crucial to note that in many very significant areas, sovereignty still remains fully in the hands of the British government, and in light of vocalised public opinion, seems set to remain there. Loughlin's recognition of both the 'legal and the political conceptions of sovereignty'51 do go some way in explaining the necessity for different interpretations of the concept, but is rendered somewhat inadequate in a discussion regarding the EU. There are many mutual benefits for the 'pooling' and sharing of national sovereignty and should be regarded not solely in terms of single market creation. Divided sovereignty also creates a community that is linked together by mutual and reciprocal bonds, helping to promote a shared bank of ideals - the continuation of a liberal democratic ethos. In light of the events of the 20th century, a body that fosters mutual respect and dependence cannot be viewed negatively. Therefore, sovereignty divided is not sovereignty destroyed, a position advocated by MacCormick and others, and the challenges faced are not a result of the end of sovereignty but are caused by the difficulties faced in developing a new concept of sovereignty that comfortably accommodates the modern European order. ...read more.