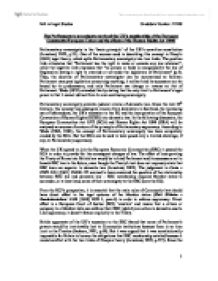 Lord Denning also concluded that section 2 had abolished the doctrine of implied repeal for British statutes affecting EEC matters (Loveland, 2003). Provisions of the ECA do not sit easily next to Parliamentary sovereignty. Section 2(1) takes the view that EU membership can alter domestic rules, while section 3(1) identifies that the meaning and effect of EU law are to be determined by reference to the principles and decisions of European courts (Armstrong, 2003, p.327). Further, the "passed or to be passed" formula of section 2(4) appears to be an attempt by the Parliament of 1972 to bind its successors from legislating in a way that was inconsistent with Community law, which goes against Dicey's negative limb. Under the doctrine of implied repeal, any Community law provision would prevail over UK legislation enacted before the ECA; this accords with Parliamentary sovereignty. However, an issue arises in the wording of section 2(4) - an enactment "to be passed" must be applied "subject to" the ECA's provisions. Wade, a strong supporter of the orthodox view of Parliamentary sovereignty, rejected the construction view as implausible, contending that section 2(4) was an attempt by the Parliament of 1972 to suspend the doctrine of implied repeal and bind its successors. He struggled to reconcile Parliament's continuity of sovereign legislative power with the need to give Community law priority and regarded it as revolutionary that the courts would abandon their traditional adherence to the will of Parliament (Armstrong, 2003). The doctrine of Parliamentary sovereignty has posed a massive obstacle during attempts to increase the level of formal protection of human rights in constitutional law (Bradley, 2004). In the past, the doctrine meant that there were no individual rights or freedoms that may not be diminished by an Act of Parliament, and courts were pressured to find ways to give effect to the ECHR. The enactment of the HRA placed European human rights norms within a domestic constitutional context, enabling provisions of the Convention to have a direct effect on domestic law (Armstrong, 2003). ...read more.

However, Marshall (1999) read it as a more specific instruction to courts to adopt a compatible interpretation even in the absence of ambiguity. This returns us to problems which also arise in respect of section 2(4) of the ECA - Armstrong (2003) asked: at what point do normal rules of construction give way to interpretative exercises that disguise significant judicial activism? In conclusion, Parliamentary sovereignty has survived neither the UK's membership of the European Community nor the effects of the HRA. Both Acts have eroded Parliamentary sovereignty, but to different extents. From an orthodox view of Parliamentary sovereignty, Wade (1996, p.571) is correct in saying that "While Britain remains in the Community, we are in a regime in which Parliament has bound its successors successfully, and which is nothing if not revolutionary". The ECA means that Community law is supreme, although this is at the grace of Parliament. Parliament may repeal the ECA and exit the EU at any time but this is highly unlikely, due to economic and political pressures. Perhaps the draftsmanship of this Act served as a lesson to the legislators of the HRA, for it seems that the HRA is more impervious to the supremacy of EC law. But of course, the discussion of some of its provisions has shown that it has not left Parliamentary sovereignty completely unaffected. The HRA may also be repealed but the Act may come to acquire a 'moral entrenchment' so that repeal becomes unthinkable (Munro, 1999). In order to find that Parliamentary sovereignty has not been changed so dramatically, we need to reassess the doctrine of Parliamentary sovereignty and redefine both its powers and limitations of powers, or adopt a different view in assessing the effect of the UK's accession to the EEC and the incorporation of the ECHR. This examination of the impact of Parliamentary sovereignty has based the doctrine on the orthodox Diceyan approach. Perhaps adopting a common law approach to Parliamentary sovereignty would offer an alternate analysis of the ECA as an evolution (Allan, 1997), instead of Wade's (1996) 'revolution'. ...read more.