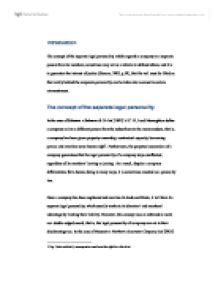 Piercing the Corporate Veil. The concept of the separate legal personality, which regards a company as a separate person from its members, sometimes may act as a vehicle to defraud others, and it is to guarantee the interest of justice (Bisacre, 2002, p.5

Introduction The concept of the separate legal personality, which regards a company as a separate person from its members, sometimes may act as a vehicle to defraud others, and it is to guarantee the interest of justice (Bisacre, 2002, p.59), that the veil must be lifted so that reality behind the corporate personality can be taken into account in certain circumstances. The concept of the separate legal personality In the case of Salomon v Salomon & Co Ltd [1897] A.C. 22, Lord Macnaghton define a company as law a different person from the subscribers to the memorandum, that is, a company has been given property ownership, contractual capacity, borrowing power, and even has some human right1. Furthermore, the perpetual succession of a company guarantees that the legal personality of a company stays unaffected, regardless of its members' leaving or joining. As a result, despite a company differentiates form human being in many ways, it is sometimes counted as a person by law. Once a company has been registered and receives its trade certificate, it will have its separate legal personality, which usually works to its directors' and members' advantage by limiting their liability. However, this concept was re-enforced to work as a double-edged sword, that is, the legal personality of company can act to their disadvantage too. In the case of Macaura v Northern Assurance Company Ltd [1925] A.C. ...read more.

Tough it is, some exceptions still have been set up, such as: fraud or fa�ade, agency, single economic unit and some other jurisdictions. Fraud, Fa�ade or Sham The court will not allow that the corporation was either formed or used for some illegal, fraudulent or unjust purpose (Nygh, 2006, p.66), otherwise, the legal personality of the company should be ignored. In the case of Gilford Motor Co v Horne [1933] CH, Horne had been the employee of Gilford Motor Co, and was bound by a contract restricting him to compete with the company. He tried to evade the covenant by setting up a new company to carried on business. Lord Hanworth stated that, 'This company was formed as a device, a stratagem, in order to mask the effective carrying on of a business by Mr. Horne.' As a result, the court was prepared to lift the corporate veil and issued an interdict. In the case of R. v Seager (Mornington Stafford) [2010] 1 W.L.R. 815, after being disqualified, Seager continued negotiating a lease for the former company, and signing documents on its behalf with the former company's bankers through a family company owned by himself. It was held that, 'the lifting of the corporate veil had been appropriate and that the companies; assets had properly been treated as having been held by the defendants.' ...read more.

On the other side, people can suffer unfair loss because it conceals the true entity of a corporation. By lifting the corporate veil, we can get rid of these companies, which are used merely as a vehicle to fraud, therefore to achieve better justice. In some area, the rate of piercing the corporate veil is as high as 45% (Kenway, 2008). It dramatically breaks the illusion of safety for these directors, who merely try to use the Salomon concept as a shield to gain illegal profits, and make them personally liable. As a modern company's director, he/she should not forget this motto: 'He that respects himself is safe from others. He wears a coat of mail that none can pierce.' --------- Henry Wadsworth Longfellow Appendix: 1. Under Company Act 2006 s. 767(3), where a public company trades without a trading certificate, personal liability can fall on the directors. 2. Under Company Act 2006 s. 399, A parent company must prepare consolidated and individual accounts for the whole group, otherwise would be personal liable. 3. Under Insolvency Act 1986 ss. 216& 217, Personal liability will be induced, it a director re-use the same name, that have been used by a insolvent company within 5 years. 4. Under Company Directors Disqualification Act 1986 s. 15, A director will be jointly and severally liable along with the company for its debts if he takes part in the management of a company while disqualified, or allows another director to do so. ...read more.