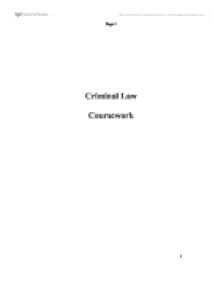 Criminal Law Coursework This essay will deal with homicide of Ali. Every crime consists of an actus reus companied by mens rea and the prosecution must prove these elements of the crime. MR may exist without an AR, but if AR does not exist than the crime is not committed. To establish criminal liability of Boris, Colin, and Dr Dan, I will deal with murder and manslaughter, together with the offences of omission, negligence, and gross negligence. It will also deal with defenses, such as Provocation and Diminished Responsibility to reduce the change of murder to manslaughter. The first accused is Boris, whose victim is PC Ali. There are two types of charges that needs to be proved, first is murder (unlawful killing of human being) the second is manslaughter (unlawful act) -can be voluntary and involuntary- that causes death1, and the offence of omission (liability for failing to intervene). The prosecution is there to prove Boris liability for murder or manslaughter on the reasonable ground. The AR (guilty conduct) and the MR (guilty mind), must be proved by the prosecution, before the defendant will be charged of murder. It is important fact that Ali's death had to be caused by an unlawful act of Boris. However, Boris may not be responsible for the final act, which caused Ali's death, but can still be liable and charged with homicide. The chain of causation, where there is a link between an act and the result, could be broken by an intervening act (Novus Actus Intervenient)2, something that is so significant that can alter Boris's liability. ...read more.

In the case of Woollin (confirmation of the Nedrick judgment), it was stated that the jury may not assume an intention, unless they are satisfied by the evidence that death or serious bodily harm was 'virtually certain' and the defendant appreciated it. In this case, Boris intention was not to kill or bodily harm Ali, it was only to frighten him. The defenses will need to have sufficient evidence to prove, that Boris has not foreseen Ali's death because the risk was slight. Therefore, the charge of murder may be quashed to constructive manslaughter. Although, the unlawful act must be a crime requiring mens rea greater than negligence (R v Lamb)15 and is dangerous, has got a risk that causes death (R v Church)16. Whether the act is unlawful and dangerous it is for the jury to decide according to the objective test by the view of all sober and reasonable people (R v Dawson)17. The jury will consider the circumstances encountered by Boris, but may not accept his allege that his misjudgment releases him from liability (R v Ball)18. The prosecution most likely will set aside Boris's defense, and they need to prove that Ali's death was virtually certain. Moreover, through the Nedrick test has to be proved that Boris's act to run over Ali by his car was therefore virtually certain and he appreciated it. If the prosecution succeed in proving the Nedrick test, then the jury will find Boris guilty of an unlawful intention to kill Ali and they will convict him for murder. ...read more.

First, to be applied is the 'but for' test (White).Would Ali has died but for Dan's action. The answer is no, but could be yes. However, Dan's action has not killed Ali -he actually killed himself (R v Blaue)28, (R v Dear) - but the end result is death. Ali did not want to suffer from the consequences of the wrong blood anymore. Furthermore, the prosecution and the defense will argue whether or not Dan's action was unlawful for the reason that he has given the wrong blood to Ali. As the causation has been mentioned above it is the jury who decides, that Dan's action was 'palpably wrong'. Prosecution will question that; did he have a duty of care, and did he breach his duty? Was there any risk of death -and most importantly- did it cause Ali's death? Moreover, if the jury will be satisfied in all these questions, then Dan may not be liable for Ali's death. However, Dan may be charged with manslaughter by gross negligence, that is a strict liability offence, and it would no need proof of mens rea. It was stated in the case of Adomako29 where the accused has had a duty of care, had breached his duty, and had caused death, so it is for the jury to consider as grossly negligent. The risk, that the doctor had taken - working for 24hrs with no break - must have been foreseeable for a reasonable man. Therefore his liability is unquestionable. If the prosecution will prove, that Ali's death was foreseeable then the Dr would be convicted of manslaughter by gross negligence. ...read more.