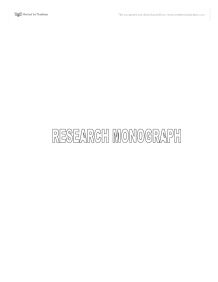 SUBMITTED FOR Prof. Dr. A .W. M. Abdul Huq Dean, Faculty of Law NORTHERN UNIVERSITY BANGLADESH SUBMITTED BY Seik Golam Maksud LL.B (Hon's) ID: LLB040200248 Department of Law NORTHERN UNIVERSITY, BANGLADESH 5th January 2008 Dr. A.W.M Abdul Huq Research Supervisor Final Dissertation Northern University Bangladesh 93 Kazi Nazrul Islam Avenue, Dhaka-1215 Letter of Transmittal Sir, It is a great pleasure for me to submit the research paper on the topic of "PUBLIC INTEREST LITIGATION". While conducting this research, I tried my level best to make this research paper to the required standard. I hope that this paper will fulfill your expectation. I, therefore, hope that you would be kind enough to go through this paper for evaluation. I am always available for any clarification of any part of this research paper at your convenience. Thanking you. Seik Golam Maksud ID: LLB040200248 Semester: 11th LL.B (Hon's) Department of Law Northern University Bangladesh Topic PUBLIC INTEREST LITIGATION Dedicated To My Late Mother Jebun Nessa PREFACE This 'RESEARCH MONOGRAPH' is the out come of our LL.B (Hon's) Course curriculum. 'The Public Interest Litigation' is a touchy and emerging concept in Bangladesh and still there is no large word in this regard. Being insisted by my friends and teachers I have taken this initiative to make a research regarding on this very topic. This is a topic, with a high profile due to its importance, relevance and necessity. I could not complete this difficult task without the help of from various individuals, organizations, books, news papers, website etc. I am grateful to lawyers, judges and academics of their valuable suggestions and assistance. I would especially like to thank Pro. Dr. A .W. M. Abdul Huq. Dean Faculty of Law, NORTHERN UNIVERSITY, BANGLADESH. I am grateful to my academic teachers, Mahbubur Rahman, Sk. Samidul Islam & Md. Saud Hasan who has given proper guideline to complete this work. ...read more.

For the first time, compensation was awarded to the detenues. Each detenue received an amount of one lakh taka. A similar case where compensation was awarded is Md. Shahanewas v. Government of Bangladesh.73 An innocent person was arrested by an ASI of Police in the name of an absconding criminal. The Court awarded compensation of an amount of twenty thousand taka to be realized from the negligent ASI. In State v. Deputy Commissioner Bogura and others,74 suo motu rule was issued when a newpaper reported unlawful detention in jail. The rule was subsequently discharged. Genuine social interest matters involving the poor and the downtrodden have been considered in several cases. In the much-publicized case of Sultana Nahar v. Bangladesh and others,75 eviction of sex-workers from their residences was challenged. Initially, the two justices of the High Court Division arrived at different conclusions. As the case was referred to the third judge, it failed both on the point of standing and on merit.76 Dr. Mohiuddin Farooque v. Bangladesh and others,77 the Flood Action Plan (FAP 20) case of Tangail was finally heard on merit and the Court gave a number of directions and orders to be complied with by the government. If media coverage and publicity is taken as a guide, one of the most important recent PIL cases is Ain O Salish Kendra (ASK) and others v. Government of Bangladesh and others.78 The petitioners challenged eviction of slum-dwellers in Dhaka without making any alternative arrangement. The Court ordered that the eviction process should proceed phase by phase, giving reasonable time and rehabilitate the slum-dwellers. In Salma Sobhan v. Government of Bangladesh and others, the petitioner challenged continued restraint of a prisoner in bear fetter (Danda beri) for a period of 33 months. Interim relief was grantee but the rule is awaiting hearing. Apart from the cases mentioned here, there are a considerable number of PIL cases pending before the courts and as such have not been reported.79 The number and variety of cases indicate the progression of PIL towards maturity. ...read more.