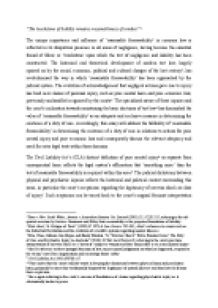 ﻿?The touchstone of liability remains reasonableness of conduct?[1] The unique importance and influence of ?reasonable foreseeability? in common law is reflected in its ubiquitous presence in all areas of negligence, having become the essential thread of fabric or ?touchstone' upon which the tort of negligence and liability has been constructed. The historical and theoretical development of modern tort law, largely spurred on by the social, economic, political and cultural changes of the last century[2], has revolutionised the way in which ?reasonable foreseeability? has been approached by the judicial system. The evolution of acknowledgement that negligent actions gave rise to injury has bred new classes of personal injury, such as pure mental harm and pure economic loss, previously unclassified or ignored by the courts[3]. The specialised nature of these injuries and the court?s inclination towards maintaining the basic doctrines of tort law[4] has diminished the value of ?reasonable foreseeability? as an adequate and exclusive measure in determining the existence of a duty of care. Accordingly, this essay will address the fallibility of ?reasonable foreseeability? in determining the existence of a duty of care in relations to actions for pure mental injury and pure economic loss and consequently discuss the relevant adequacy and need for extra legal tests within these domains. ...read more.

The existence of these tests is, henceforward, a reflection of the courts? desire to properly compensate victims of pure economic loss in legitimate circumstances whilst curtailing the possible matter of indeterminacy. Indeed this inference can be drawn from Bluebird Airlines? and WhoppaOz Pies? respective situations in the fact scenario, where both failed in their actions for pure economic loss. Bluebird Airlines? action failed upon the unreasonableness of their reliance upon MegaEvents? statement. Such a denial is a distinct manifestation of the courts? desire to encourage people to exercise a suitable level of caution[18] before relying on statements made by businesses in a commercial culture which is excessively characterised by hyperbolic rhetoric. Conversely, the failure of WhoppaOz Pies? claim, revolving around their lack of vulnerability in connection with MegaEvent?s negligence, is emblematic of the courts? concern over indeterminacy. The extra legal tests stipulated in Caltex[19] and Perre[20] indicate that whilst negligent acts can circuitously affect many people, the courts have placed a greater emphasis on those who are particularly vulnerable as opposed to those who are slightly vulnerable, in order to eliminate the issue of indeterminacy. In essence, the existence of these extra legal tests signifies the courts? belief that pure economic loss is a reality within capitalist societies and that a mere test ...read more.

s31, the court?s insistence on eliminating fake claims [11] Civil Liability Act 2002 (NSW) s30; limitations regarding recovering for pure mental harm dealing with either witnessing the event or having a special relationship with the victim [12] Civil Liability Act 2002 (NSW) s32; affirming the need to limit the scope of liability by limiting claims to people of normal fortitude and those in close proximity and/or relationship with the mafia [13] Hedley Byrne & Co Ltd v Heller & Partners Ltd [1964] AC 465 [14] Perre v Apand Pty Ltd (1999) 198 CLR 180 [15] Carolyn,Sappideen and Prue,Vines and Helen,Grant and Penelope,Watson. Torts Commentary and Materials (Thomas Reuters (Professional) Australia Limited, 10th ed, 2009), pg 301 [16] The legitimacy and need for businesses to compete with other and inflict loss upon each other to uphold free market principles. [17] Justice Cardozo?s famous quote that treating pure economic loss in the same way as physical injury might mean, ?a thoughtless slip or blunder?may expose (defendants) to a liability in an indeterminate amount for an indeterminate time to an indeterminate class? [18] Abel?s reference to the aim of tort law to encourage safety and caution in the future must be upheld by the courts of today [19] Caltex Oil (Australia) Pty Ltd v The Dredge ?Willemstad? (1976) 136 CLR 529 [20] Perre v Apand Pty Ltd (1999) 198 CLR 180 ...read more.