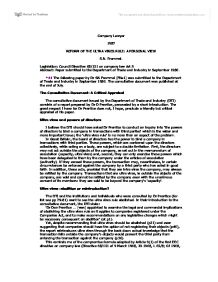 Reform of the ultra vires rule: A personal view.

Company Lawyer 1987 REFORM OF THE ULTRA VIRES RULE: A PERSONAL VIEW S.N. Frommel. Legislation: Council Directive 68/151 on company law Art.9 Abstract: Paper submitted to the Department of Trade and Industry in September 1986. *11 The following paper by Dr SN Frommel [FNa1] was submitted to the Department of Trade and Industry in September 1986. The consultative document was published at the end of July. The Consultative Document: A Critical Appraisal The consultative document issued by the Department of Trade and Industry (DTI) consists of a report prepared by Dr D Prentice, preceeded by a short introduction. The great respect I have for Dr Prentice does not, I hope, preclude a friendly but critical appraisal of his paper. Ultra vires and powers of directors I believe the DTI should have asked Dr Prentice to conduct an inquiry into 'the powers of directors to bind a company in transactions with third parties' which is the wider and more important issue; the 'ultra vires rule' is no more than an aspect of the problem. In Great Britain, the board of directors has the power to bind a company in transactions with third parties. These powers, which are conferred upon the directors collectively, while acting as a body, are subject to a double limitation. First, the directors may not act outside the objects of the company, as set out in the memorandum of association (capacity, ultra vires) and, second, they can only exercise those powers which have been delegated to them by the company under the articles of association (authority). If they exceed these powers, the transaction may, nevertheless, in certain circumstances be enforced against the company by a third party who has acted in good faith. In addition, these acts, provided that they are intra vires the company, may always be ratified by the company. Transactions that are ultra vires, ie outside the objects of the company, are void and cannot be ratified by the company even with the unanimous consent of its members: they are said to be beyond the company's 'capacity'. ...read more.

will rarely occur' (at p32). Will there be many cases or only a few? Whatever the answer, the argument concerning knowledge of limitations imposed by the objects also applies to knowledge of limitations on the powers of the board arising from the articles. The proposal (at p32 of the report) is also surprising in view of the criticism expressed by Dr Prentice in the LQR in 1973 which shows that he actually knows (no pun intended) that the defence of actual knowledge of limitations on powers of directors is not allowed by the first directive. On this point, the directive follows German law. In Germany, the third party's mere knowledge of the limitations on the authority of the directors is not sufficient to prevent him from enforcing the transaction against the company. But the third party is not protected if there has been collusion, ie if he has acted, together with the company's representative, deliberately to the company's detriment. On collusion and abuse of corporate powers, see Wiedemann, Gesellschaftsrecht (Munich:Beck, 1980), Vol I, p525, with further references. In France as in Germany, it was not thought necessary to mention expressly the availability of an exceptio doli. It is otherwise in Italy where Article 2384(2) of the Civil Code provides: 'Restrictions on the power to represent the company derived from the memorandum or articles, even if published, may not be invoked against third parties unless it is proved that the latter acted intentionally to the prejudice of the company (salvo che si provi che questi abbiano intenzionalmente agito a danno della societ�). For the background, see La Villa, L'oggetto sociale (Milan:Giuffr�, 1974), p255. The Alternative Models The first directive The issue is not whether the first directive has or has not been fully implemented. In my view, the real issue is whether the model proposed by the consultative document is better than the one proposed (or should I say imposed) ...read more.

The Act should provide: 'In dealing with third parties, the company is bound by transactions entered into by its board of directors, even if they fall outside the scope of the company's objects.' Restrictions on powers of board As the powers of the directors will now derive from a provision of the Act (see above); the Act should state: 'Any restriction placed on the powers of the board by the company's memorandum or articles or by a resolution of the board or of the shareholders may not be invoked against third parties.' If it is felt that an exceptio doli is needed, the proviso found in Art 2384 in fine of the Italian Civil Code could be adopted. Powers reserved to shareholders Obviously, 'the powers reserved to the meeting of shareholders cannot be excercised by the board.' Also, *16 the Companies Act, not the articles, will have to enumerate the powers reserved to the shareholders. Board with more than one member Finally, the Act should provide: 'If the board of directors consists of more than one member, all members can only represent the company jointly, unless the articles decide otherwise.' Conclusions In my view, the main concern of the consultative document should have been 'the powers of directors to bind a company in transactions with third parties'. Also, ultra vires should have been abolished entirely and not reintroduced in the shape of 'the third party's actual knowledge that the transaction falls outside the company's objects'. I believe that in transactions between the company and third parties, the concept of 'directors as agents' and 'powers delegated to the directors in the articles' should be replaced by 'directors as organs' and 'powers of the directors derived from the Companies Act'. Finally, I submit the text of the six provisions that in my view ought to be enacted: two of them to implement the first EEC directive on company law; the other four to replace s35 of the Companies Act 1985. FNa1. Reader in European Business Law, City of London Polytechnic. COMPLAW 1987, 8(1), 11-16 ...read more.