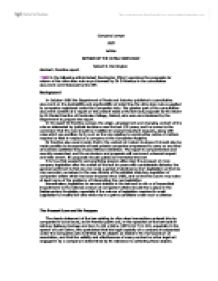 Reform of the ultra vires rule.

Company Lawyer 1987 Article REFORM OF THE ULTRA VIRES RULE Robert R. Pennington. Abstract: Prentice report. *103 In the following article Robert Pennington [FNa1] examines the proposals for reform of the ultra vires rule as put forward by Dr D Prentice in the consultative document commissioned by the DTI. Background In October 1986 the Department of Trade and Industry published a consultative document on the desirability and practicability of reforming the ultra vires rule as applied to companies registered under the Companies Acts. The greater part of the consultative document consists of a report on the present state of the law and proposals for its reform by Dr Daniel Prentice of Pembroke College, Oxford, who was commissioned by the Department to prepare the report. In his report Dr Prentice surveys the origin, development and changing content of the rule as elaborated by judicial decisions over the last 120 years, and he comes to the conclusion that the rule should be modified in several important respects, along with rules which are ancillary to it, such as the rule relating to constructive notice of matters required or filed in respect of a company at the Companies Registry. Dr Prentice also recommends that in the context of modern business it should also be made possible to incorporate at least private companies empowered to carry on any kind of business activities they choose without restriction. The report is comprehensive and soundly researched, and its conclusions and proposals will command universal respect and wide assent. Its proposals should quickly be translated into law. It is true that academic and practising lawyers alike view the prospect of more company legislation after the surfeit of the last six years with considerable distaste; the general sentiment is that we now need a period of abstinence from legislation so that we may accustom ourselves to the new climate of the detailed statutory regulation of companies' affairs which has been imposed since 1980, and so that the courts may solve at least some of the problems of interpreting the new legislation. ...read more.

by their memoranda and articles of association. If this proposal were adopted, companies would have the same capacity to enter into contracts, engage in transactions and do other legal acts as an adult human being who is subject to no disabilities. It would therefore be impossible for a transaction to which a company is a part to be held invalid merely on the ground that the company lacked the ability in law to enter into it. This would not necessarily mean that the transaction is valid in all respects, and it would still be open to challenge on other grounds, and the company's officers or agents would still be liable if they breached their duties in entering into it. This proposal is not as radical as may at first appear, because it represents the law as it has existed since the 16th century in respect of companies incorporated by charter granted by the Crown (Sutton's Hospital Case (1612) 10 Co Rep 1a, 23a and 30b; British South Africa Co v De Beers Consolidated Mines Ltd [1910] 1 Ch 354). The early common law was unable to conceive of disabilities other than ones which manifest themselves naturally in human beings (eg infancy, insanity) or which are imposed to give effect to public policy (eg alienage, outlawry). Had registered companies existed in the 16th century, it is most unlikely that the rule laid down in the Ashbury Railway Carriage Case would have ever seen the light of day. Nevertheless, statutory extension of the notion of full legal capacity to registered as well as chartered companies would remove one of the impediments to the validity of companies' transaction, but it would still leave other and probably more serious impediments intact, unless the rules embodying them were modified as well, and Dr Prentice proposes that this shall be done. The justification for his first proposal, therefore, is that the concept of the limited legal capacity of a company serves no useful purpose, and provides no protection for shareholders or others which is not also provided by other rules. ...read more.

It would therefore still be possible for members of a company to obtain injunctions to restrain the company and its directors from acting inconsistently with its objects, and directors would still be liable to their companies for any loss they caused them by acting in disregard of their objects. Dr Prentice makes no recommendations about the law governing directors' personal liability for acting or applying their company's resources for ultra vires purposes. It is open for discussion whether their liability in that respect should not be reduced from the present absolute liability to liability only for acting without proper skill and care. This should be adequate and acceptable if legislation adopting Dr Prentice's other proposals resulted in shorter objects clauses in memoranda of association; this would achieve the original intended purpose of such clauses, namely, to state briefly the areas of business in which the company intended to engage, and the desirable absence of complexity should help to avoid misinter-pretation. Conclusion The main proposals in Dr Prentice's report have been covered in this article. In the final chapters of the report he deals with the remedies available to shareholders if a company pursues ultra vires activities, the legality of donations made by companies and the law governing charitable companies, but he finds no need to change the existing law in respect of any of these matters. The Prentice Report will be judged on the proposals it contains for altering the existing law on the legal capacity of companies, on the binding effect of transactions entered into by their boards of directors and their directors individually, and on the facility for incorporating companies without express objects and whose objects will consequently be universal. If these proposals are adopted the law in this area will be simpler, more intelligible, more practical and easier to enforce. FNa1. Professor of Commercial Law, Birmingham University COMPLAW 1987, 8(3), 103-109 ...read more.