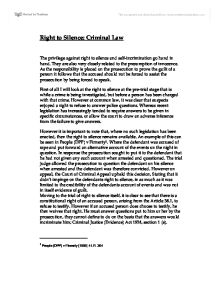 Right to Silence. The privilege against right to silence and self-incrimination go hand in hand. They are also very closely related to the presumption of innocence. As the responsibility is placed on the prosecution to prove the guilt of a person it follo

Right to Silence: Criminal Law The privilege against right to silence and self-incrimination go hand in hand. They are also very closely related to the presumption of innocence. As the responsibility is placed on the prosecution to prove the guilt of a person it follows that the accused should not be forced to assist the prosecution by being forced to speak. First of all I will look at the right to silence at the pre-trial stage that is while a crime is being investigated, but before a person has been charged with that crime. However at common law, it was clear that suspects enjoyed a right to refuse to answer police questions. Whereas recent legislation has increasingly tended to require answers to be given in specific circumstances, or allow the court to draw an adverse inference from the failure to give answers. However it is important to note that, where no such legislation has been enacted, then the right to silence remains available. An example of this can be seen in People (DPP) v Finnerty1. Where the defendant was accused of rape and put forward an alternative account of the events on the night in question. In response the prosecution sought to put it to the defendant that he had not given any such account when arrested and questioned. The trial judge allowed the prosecution to question the defendant on his silence when arrested and the defendant was therefore convicted. ...read more.

Also a person cannot be charged with a crime unless that crime is one recognised in law. In particular it is necessary that the charges against a person relate to a specific activity that is expressly deemed in Law to be illegal. "As with the privilege against self-incrimination, the common law recognised it as a right against double jeopardy. Thus in bar of a trial on indictment one could plead in appropriate circumstances a prior acquittal or conviction, of the offence changed; a similar rule applied in regard to summary prosecutions."9 "The privilege against self-incrimination, which provides for a right to silence and a right not to incriminate oneself, lies at the heart of a fair criminal procedure and underlies the legal principle that a person is innocent until proven guilty."10 The right to silence and privilege against self-incrimination in Ireland is not an absolute right. However, in the vast majority of criminal offences this right does apply. When you are accused of a criminal offence you enjoy the right to silence unless you are informed by the Garda� that the particular offence for which you are arrested places a certain obligation on you. The Garda� must also inform you of the consequences if you fail to comply. There is also a Constitutional guarantee, that every person accused of a criminal offence in Ireland is innocent until proven guilty. ...read more.

In O'Leary v Attorney General13, the plaintiff challenged the constitutionality of two sections of the offences Against the State Act 1939, which provided that the possession of an "incriminating document," would be evidence of a membership of an unlawful organisation as it would be the belief of a chief superintendent to this effect. The plaintiff claimed that the effect of these sections was to reverse the presumption of innocence, requiring him to prove that he was a member of an unlawful organisation. The Supreme Court rejected this argument, however, holding that these sections provide for evidence of membership, but not proof of membership. As we have seen, the legislation aimed to limit the instances in which a defendant could remain silent in the face of police questioning by ensuring that this would be brought to the attention of the court. There were good reasons for this; a guilty person should not be able to hide behind silence to avoid the consequences of his actions and an innocent person should speak out so that he can be eliminated from the police enquiry so that the true offender can be found. It is in the interests of society that the police must have sufficient powers to investigate offences and the law should reflect this by ensuring that all persons must cooperate fully by answering questions put to them by the police. There is so much to favour this position that this is surely an instance in which the rights of the suspect should be trumped by the interests of society. ...read more.