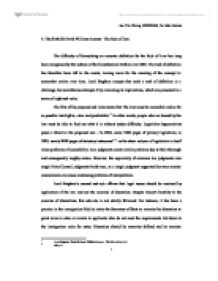 4. The Sixth Sir David Williams Lecture- The Rule of Law The difficulty of formulating an accurate definition for the Rule of Law has long been recognised by the authors of the Constitutional Reform Act 2005. The task of definition has therefore been left to the courts, leaving room for the meaning of the concept to somewhat evolve over time. Lord Bingham accepts that such a task of definition is a challenge, but nevertheless attempts it by examining its implications, which are presented in a series of eight sub-rules. The first of his proposed sub-rules states that 'the laws must be accessible and so far as possible intelligible, clear and predictable.'1 In other words, people who are bound by the law must be able to find out what it is without undue difficulty. Legislative hyperactivity poses a threat to the proposed rule -'in 2004, some 3500 pages of primary legislation; in 2003, nearly 9000 pages of statutory instrument'2- as the sheer volume of legislation in itself raises problems of accessibility. ...read more.

may, in principle, conform to the requirements of the rule of law.'5 Lord Bingham discards this notion, accepting the idea that 'it is essential, if man is not to be compelled to have recourse... to rebellion against tyranny and oppression, that human rights should be protected by the rule of law.'6 It is also stated that 'means must be provided for resolving... bona fide civil disputes which the parties themselves are unable to resolve.'7 Such a claim recognises the right of unhindered access to a court as a fundamental right, which, when accepted, poses the question of how the less well-off are to assert his or her rights at law. This was addressed through the Legal Aid scheme in 1948. However, the exponential rise of the cost of this scheme led to its entailment. Successive governments have insisted that the cost of running the courts should be covered by its litigants, the danger of which, again, is that such a system may disable the less well-off from obtaining the necessary legal services. ...read more.

This is a good descriptive account of Lord Bingham's speech, which selects the most salient points for each of the eight sub-rules.

A different approach would have been required if the question demanded a critical assessment of the rules.

To improve this essay, the student should find recent cases which illustrate application of the rules. A good example would be the extradition of Abu Qatada.