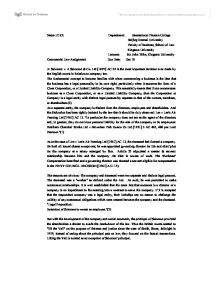 Salomon v. A Salomon &amp; Co. Ltd [1897] AC 22 is the most important decision ever made by the English courts in Relation to company law.

Name: JI KE Department: International Finance College Beijing Normal University Faculty of Business, School of Law Kingston University Lecturer: Mr. John Tribe, Kingston University Commercial Law Assignment Due Date: Dec 10 A: Salomon v. A Salomon & Co. Ltd [1897] AC 22 is the most important decision ever made by the English courts in Relation to company law. The fundamental concept to become familiar with when commencing a business is the idea that the business has a legal personality in its own right, particularly when it assumes the form of a Close Corporation, or a Limited Liability Company. This essentially means that if one commences business as a Close Corporation, or as a Limited Liability Company, then the Corporation or Company is a legal entity with distinct legal personality separate to that of the owners, members, or shareholders.(2) As a separate entity, the company is distinct from the directors, employees and shareholders. And the distinction has been rightly insisted by the law that it should be duly observed: Lee v Lee's Air Farming Ltd [1961] AC 12. "In particular the company does not act as the agent of the directors and, in general, they do not incur personal ...read more.

"Legal Proposition: Extension of Salomon to owner as employee."(3) But with the development of the company and social economic, the principal of Salomon provided the shareholders a shelter to evade the crack-down of the law. Thus the British courts started to "lift the Vail" on the purpose of fairness and justice since the case of Smith, Stone, &Knight in 1939, instead of caring about the principal part on law, they focused on the factual transactions. Lifting the Vail is existed as an exception of Salomon' principal. The relevant cases are shown as DHN Food Distributors Ltd and others v. London Borough of Tower Hamlets [1976] 3 All ER 402 , Bank of Tokyo v. Karoon [1987] AC 45N and Adams v. Cape Industries plc [1990] BCC 786. In the judgments of Standard Chartered Bank (Respondents) v Pakistan National Shipping Corporation (Appellants) and Standard Chartered Bank (Appellants) v Pakistan National Shipping Corporation and Others and Another (Respondents) and Others), Saloman v Saloman Co Ltd [1897] AC 22 was described that companies have been recognized as separate legal entities to their shareholders, their directors and their employees. ...read more.

This is not a necessary characteristic of a commercial corporation. Indeed even for some time after the Limited Liability Act 1855 there were major trading entities which had been incorporated but the investors in which were exposed to unlimited liability for the corporation's debts. This could, and not infrequently did, result in the investors' ruin. By reducing and defining the potential risk to investors, limited liability opens the way for modern companies to raise the necessary capital for their business, either privately or on the stock market. For this reason, only in exceptional circumstances does the law allow a creditor of the company to pierce the veil of incorporation and fix the shareholders with personal liability: Salomon v A Salomon & Co Ltd [1897] AC 22. The statements above were all belonging to "lift the Vail". It was caused by principal of Salomon, though it was cited as an exception, it was still in relation to Salomon' principal. The case of Solomon is important, not only because it establishes the principle of separate legal personality and provides the reference to subsequent cases, but also because the significant development of the initial principal-lift the Vail, which is more fair and used to solve many problems. Internet sites 1. www.judgement of houselords.com 2. www.law -online.com 3. www.unbf.ca.cn ...read more.