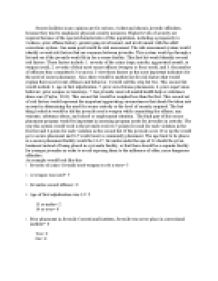 Sentencing Juveniles. The risk assessment system would identify several risk factors that are common between juveniles. This system would go through a list and see if the juvenile would fit in for a secure facility

﻿Secure facilities in my opinion are for serious, violent and chronic juvenile offenders, because they tend to emphasize physical security measures. Higher levels of security are required because of the special characteristics of this population, including a propensity to violence, prior offense history, greater gang involvement, and involvement with the adult corrections system. One main goal would be risk assessment. The risk assessment system would identify several risk factors that are common between juveniles. This system would go through a list and see if the juvenile would fit in for a secure facility. This first list would identify several risk factors. These factors include: 1. severity of the crime (rape, murder, aggravated assault, or weapon used), 2. severity of their most recent offense (weapon or force used), and 3. the number of offenses they committed (3 or more). I view these factors as the most important indicators for the need of secure placement. ...read more.

If the juvenile score 10 or up the would go to secure placement and 0-5 would receive community placement. The age limit to be places in a secure placement facility would be 13-17. Juveniles under the age of 13 should be given treatment instead of being placed in a juvenile facility, or that there should be a separate facility for younger juveniles in order to avoid exposing them to the influence of older, more dangerous offenders. An example would look like this: 1. Severity of crime- Juvenile used weapon to rob a store= 5 1. A weapon was used= 5 1. Juveniles second offense= 0 1. Age of first adjudication was 13= 2 13 or under= 2 14 or over= 0 1. Prior placement in Juvenile Correctional Institute, Juvenile was never place in correctional institute= 0 Yes= 2 No= 0 1. Prior runaways, juvenile has 4 prior runaways= 2 3 or more= 2 2or less= 0 1. ...read more.

If the juvenile violates his/or her probation they will then be incarcerated. Community service would make juveniles work a set number of hours doing community improvement work. Day treatment programs would be a facility where juveniles report during the day for school, vocational, and other treatment programs. This program is highly structured and focused on keeping stricter supervision on a juvenile than just through probation alone. House arrest would be for juveniles who committed a more serious offense. House arrest does not allow the juvenile to leave their house other than to go to school, work, court, or treatment program. After this juvenile has served their sentence I would make sure they get aftercare. I would place this juvenile on determinate aftercare until they seem fit to be released. After the juvenile completes aftercare they can be released back into the community because they should now know how to act without committing crime (Taylor, 2011). Taylor, W. (2011). Juvenile justice. (3 ed., pp. 306-332). New York, NY: McGraw-Hil ...read more.