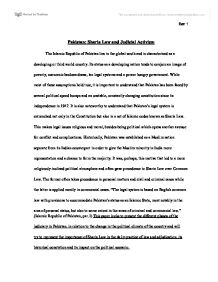 Pakistan: Sharia Law and Judicial Activism The Islamic Republic of Pakistan lies in the global south and is characterized as a developing or third world country. Its status as a developing nation tends to conjure an image of poverty, economic backwardness, lax legal systems and a power hungry government. While most of these assumptions hold true, it is important to understand that Pakistan has been faced by several political speed bumps and an unstable, constantly changing constitution since its independence in 1947. It is also noteworthy to understand that Pakistan's legal system is entrenched not only in the Constitution but also in a set of Islamic codes known as Sharia Law. This makes legal issues religious and moral, besides being political which opens another avenue for conflict and complications. Historically, Pakistan was established as a Muslim nation separate from its Indian counterpart in order to give the Muslim minority in India more representation and a chance to form the majority. It was, perhaps, this motive that led to a more religiously inclined political atmosphere and often gave precedence to Sharia Law over Common Law. The former often takes precedence in personal matters and civil and criminal cases while the latter is applied mostly in commercial cases. "The legal system is based on English common law with provisions to accommodate Pakistan's status as an Islamic State, most notably in the area of personal status, but also to some extent in the areas of criminal and commercial law." (Islamic Republic of Pakistan, par.1) This paper looks to present the different phases of the judiciary in Pakistan, in relation to the change in the political climate of the country and will try to represent the importance of Sharia Law in the daily practice of law and adjudication, its historical conotation and its impact on the political scenario. A History of Pakistan The state of Pakistan came into being on August 14, 1947 after the partition of the state of India and liberation of British colonial rule. ...read more.

It has regulations for personal hygiene, diet, sexual conduct and even elements of parenting. It also prescribes specific rules for prayers, fasting, giving to the poor and many other religious matters. Crimes under Islamic Law can be broken down into three major categories. Each will be discussed in greater detail with some common law analogies. The three major crime categories in Islamic Law are: 1. Hadd [plural Hudud] Crimes (most serious). 2. Tazir Crimes (least serious). 3. Qesas Crimes (revenge crimes restitution). Hadd crimes are the most serious under Islamic Law, and Tazir crimes are the least serious. (Al-Afi, 227-236) Islamic law though different from the Common law and Civil law traditions, cannot be considered any less legitimate or authoritative in an Islamic state. All Muslims are bound by its provisions and punishments. This has been clearly established in the Pakistani court system through the existence of Federal Shariat Courts and Ulemas. The power of Sharia law cannot be underestimated or considered any less than that of the Constitution and the Common Law system in Pakistan. Constitutional Status of Islamic Law in Pakistan Pakistan has been recognized as the largest Islamic state in the world. With this recognition comes the acceptance of a prevalent Islamic code in the country's legal system. Therefore, it is hardly surprising to see the intervention and inclusion of Islam in the modern Constitution of Pakistan. Article 1 of the Constitution of 1973, which is the Constitution in force today in Pakistan, states that Pakistan shall be known as "the Islamic Republic of Pakistan" and Article 2 declares Islam as the state religion. In 1985, the insertion of Article 2A of the Constitution included that all laws had to be brought into consonance with the Quran and sunnah. Chapter 3A establishes the Federal Shariat Court and stipulates that the court shall take up the examination of any law or provision of law that may be repugnant to the "injunctions of Islam as laid down in the Holy Quran and the Sunnah." ...read more.

With a liberal government now in place, the international community could help reverse the tide of radicalism in Pakistan if it fully supports a sustained democratic transition, including an independent judiciary. Conclusion In 61 years of freedom, Pakistan has yet to see an era of political stability and peaceful democratic rule yet it has come a long way from the throws of complete political chaos to a state of transitional democracy. With the political system, the legal system has also grown and changed and transformed into a far more liberal, independent and powerful organ of the government. The once suppressed courts are no longer afraid to express their views and do not blindly support the government and validate their actions without reason. It took 61 long years to reach this point and it will take even longer for this system to actually stabilize and become a power to contend with, yet Pakistan's future looks bright in the event of its transitional democratic status. Until 2007, the courts had little or no voice in political issues and legislations especially because of military rule and martial law in the country. At most times, courts chose to voice the same opinions that the government did and were seen as weak and controlled. However, after Justice Iftikar Chaudhry's dismissal, the uproar caused by the courts proved that they would no longer lay low and accept their fate but would take positive action to secure their role in the government. In self-preservation interests, the courts have often given in to Sharia law which almost provides a platform to base their judgment of the government on. It is far easier for courts to declare laws as inconsistent with the Quran than it is for them to do it with respect to the Constitution. Thus, Islamic law and judicial activism seem to go hand in hand with one legitimizing the others claim to power. Thus, it seems like Pakistan is definitely moving towards a more liberal, democratic future but even so, it will not lose its Islamic character and Islamic laws. ...read more.