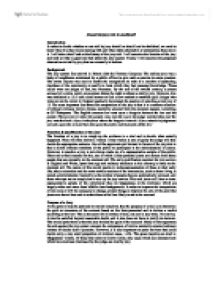 Should the jury trial be abolished?

Should the jury trial be abolished? Introduction In order to decide whether or not trial by jury should or should not be abolished, we need to know what it is that we are dealing with and what viable alternative or alternatives there are to it. I will take a brief look at the history of the jury trial. I will examine the function of the jury and look at what is good and bad about the jury system. Finally I will examine the proposed alternatives to trial by jury that are currently in fashion. Background The jury system first arrived in Britain after the Norman Conquest. The earliest jury was a body of neighbours summoned by a public officer to give oath as answer to some question. The sworn inquest was used to enable the recognition on oath of a number of upstanding members of the community to testify to facts which they had personal knowledge. Those called were not judges of fact, but witnesses. By the end of the twelfth century, a person accused of a crime could, on payment obtain the right to obtain a trial by jury. However, this was abolished in 1215 and a need arouse to find a new method to establish guilt. ...read more.

However, the question asked was whether or not we should abolish it? In order to be able to make a judgement it is only fair that we look to the possible alternatives to try to evaluate whether they would represent an improvement on our present system. One option to consider would be to use the inquisotorial system as used in many parts of the world. The advantage of using a single judge could be that the problem of perverse verdicts would be greatly reduced. We could expect judges to assess evidence rationally, and with intelligence and understanding juries are likely to be swayed by irrational factors, such as emotion, prejudice and rhetoric. Judges on the other hand, would be likely to base their verdicts on a dispassionate appraisal of the evidence. Also jury trails can be expensive and slow. Trail by investigating judges would result in not just more reasoned verdicts, but also quicker verdicts. Nevertheless, although judges are supposed to be independent, there would always be the suspicion that they were acting as agents of the government. However, the key benefit of the jury system is public participation and all that it brings with it. ...read more.

Jurors may have difficulty in understanding a fraud case. The Roskill Committee in 1986 recommended abolishing juries for complex fraud cases. Other Disadvatages Jury nobbling. Slow trials. Expensive. Conclusion One cannot get away from the fact that jury trial is expensive, when compared to Magistrates trials. In 1997-98 a trial day cost �8,700 at crown court and only �500 at a Magistrates court. None of our public services have bottomless budgets and the savings that could potentially be made by abolishing the jury system are substantial. However I feel that the alternatives to the jury system proposed all have major flaws, some of which could adversely affect the perception of our criminal justice system as being overall a fair and just system. I feel that we should keep trial by jury and implement reforms that ensure that it becomes an even fairer and more representative system. Bibligraphy David M. Walker The Oxford Companion To Law (1980) p 686. British Criminal Statistics Source www.criminal-justice-system.gov.uk [1]www.criminal-courts-review.org.uk/ Chapter 5 Juries Jury Excusal and Deferral, Research Findings No. 102, Home Office Research Development and Statistics Directorate [2]www.criminal-courts-review.org.uk/ Chapter 5 Juries Para 16 [3]www.criminal-courts-review.org.uk/ Chapter 5 Juries Para 26 [4]www.criminal-courts-review.org.uk/ Chapter 5 Juries Para 27 The Jury at Work (1972) [5]www.parliament.uk/commons/lib/research/rp2000/rp00-023.pdf Page 18-19 British Criminal Statistics By Tom Walkins Source www.criminal-justice-system.gov.uk [6]www.warwick.ac.uk/news/pr/law/191 Criminal Justice (Mode of Trial) Bill Briefing Note [7]www.homeoffice.gov.uk/motbrief.htm [8]www.parliament.uk/commons/lib/research/rp2002/rp02-073. ...read more.