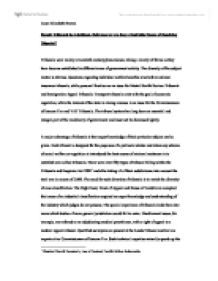 Should Tribunals be Abolished, Reformed or are they a Desirable Means of Resolving Disputes?

Should Tribunals be Abolished, Reformed or are they a Desirable Means of Resolving Disputes? Tribunals were mainly a twentieth century phenomenon, taking a variety of forms as they have become established in different areas of government activity. The diversity of the subject matter is obvious. Questions regarding individual welfare benefits arise before national insurance tribunals, while personal liberties are an issue for Mental Health Review Tribunals and Immigration Appeal Tribunals. Transport tribunals exist with the goal of economic regulation, while the interest of the state in raising revenue is an issue for the Commissioners of Income Tax and VAT Tribunals. The tribunal system has long been an essential and integral part of the machinery of government and must not be dismissed lightly. A major advantage of tribunals is that expert knowledge of their particular subject can be given. Each tribunal is designed for the purposes of a particular statute and when any scheme of social welfare or regulation is introduced the best course of minimal resistance is to establish new ad hoc tribunals. There were over fifty types of tribunal falling within the Tribunals and Enquiries Act 19921 and after taking all of their subdivisions into account the total was in excess of 2,000. The need for such diversity of tribunals is to match the diversity of case classification. ...read more.

There are a finite number of resources available and so a decision favouring one individual could potentially affect the outcome for the next individual. The appeasing of the people standing before a tribunal could again be rather false as there is a lack of representation and the people may feel as if their trials have been satisfactorily dealt with when in reality the decision made is merely a reflection of parliamentary instruction. I am therefore of the rather controversial opinion that the conception of tribunals as representing independent decision-making is rather farcical. The tribunals only lose their legitimacy through lack of legal representation and the intimated movement away from parliamentary control. Much controversy arises from the lack of legal aid to cover all tribunals6, thus resulting in a lack of legal representation. Although I am of the opinion that tribunals are important in our legal system and should not be abolished, I am not of the rather blind opinion that there is no need for reform. The question of whether legal aid should be extended to cover representation by a solicitor or, where necessary, counsel in tribunal matters, is frequently discussed. Many people are of the opinion that the extension of legal aid would lead to the formalisation of the current system, as legal representation would become more common in tribunals, however I am not sure this is sufficient justification for a refusal of legal aid extension. ...read more.