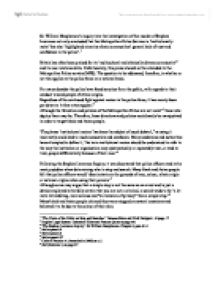 Sir William Macpherson's inquiry into the investigation of the murder of Stephen Lawrence not only concluded that the Metropolitan Police Service is 'institutionally racist' but also 'highlighted minority ethnic communities' general lack of trust and confidence in the police'.1 Britain has often been praised for its 'multicultural and ethnically diverse community'2 and its race relations skills. Unfortunately, this praise should not be extended to the Metropolitan Police service (MPS). The question to be addressed, therefore, is whether or not this applies to the police force on a national basis. For many decades the police have faced scrutiny from the public, with regards to their conduct toward people of ethnic origins. Regardless of the continued fight against racism in the police force, it has merely been put down to 'a few rotten apples'.3 Although the 'direction and policies of the Metropolitan Police are not racist'4 those who deploy them may be. Therefore, these directions and policies could easily be manipulated in order to target black and Asian people. 'The phrase 'institutional racism' has been the subject of much debate',5 as using it incorrectly could lead to much accusation and confusion. Many academics and authorities have attempted to define it; 'the term institutional racism should be understood to refer to the way the institution or organisation may systematically or repeatedly treat, or tend to treat, people differentially because of their race.'6 Following the Stephen Lawrence Inquiry, it was discovered that police officers tend to be most prejudice when determining who to stop and search. ...read more.

The programme revealed Greater Manchester Police's officers using horrific terminology and voicing aggressive fantasies they wished to deploy against ethnic minorities. It is a wonder how they were accepted into the service which is supposedly bringing criminals to justice, when they are the actual criminals. The programme did not do much for the already 'eroded public confidence in the police'15, other than make the situation worse. Even though Sir William Macpherson identified the MPS as institutionally racist in February 1999, six years on the national police force has failed to improve its ways. The Macpherson Inquiry was supposedly an aid and warning to the police force on a national basis, and not just to the MPS, to improve their communications and handling of ethnic minorities. Why then, have the police Service failed to do this? Sir William Macpherson held that 'there must be an unequivocal acceptance of the problem of institutional racism and its nature before it can be addressed.' Thus, unless the Police Service admits that racism exists, nothing can be done. Perhaps this is where the Police Service has gone wrong. Their failure to own up to such unacceptable behaviour has led to a failure to rectify the problem. The former Commissioner of the MPS, Sir Paul Condon refused to accept that 'institutional racism' was a problem in his police force. ...read more.

Furthermore, since the July 7th London bombings there has been major 'concern among Muslims that they would be unfairly targeted'24 by the police. It seems that as time progresses the public begin to lack more and more faith in the Police Service. In conclusion, I agree with Sir William Macpherson that the Metropolitan Police Service is 'institutionally racist', but I also feel that this applies to the rest of the police force on a national basis. It is time for the Policing Services to move forward and stop living in the Victorian times. Britain is changing every day and in order for it to remain one of the most developed countries in the world, its members must move forward, particularly those who are in charge of the day-to-day running of the country. 'We have to take the lessons we learned about stop and search with regard to the black community'25 to help us improve our relations with ethnic communities. It is time to eliminate this 'canteen culture' from its root and do something about the selection process of our police officers. The words of Martin Luther King have never made more sense than at this present moment in time: 'I have a dream that my four little children will one day live in a nation where they will not be judged by the colour of their skin but by the content of their character. ...read more.