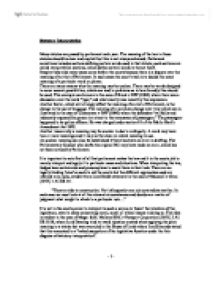 Statutory Interpretation Many statutes are passed by parliament each year. The meaning of the law in these statutes should be clear and explicit but this is not always achieved. Parliament sometimes includes sections defining certain words used in that statute; such sections are called interpretation sections, which define certain words in the act itself. Despite these aids many cases come before the courts because there is a dispute over the meaning of an Act of Parliament. In such cases the court's task is to decide the exact meaning of a particular word or phrase. There are many reasons why the meaning may be unclear. There may be words designed to cover several possibilities, which can lead to problems as to how broadly this should be used. This example can be seen in the case of Brock v DPP (1993) where there was a discussion over the word "type," and what exactly was meant by this expression. Another factor, which will strongly affect the meaning of an Act of Parliament, is the change in the use of language. The meaning of a word can change over time which can is illustrated in the case of Cheeseman v DPP (1990) where the defendant "willfully and indecently exposed his person in a street to the annoyance of passengers." The passengers happened to be police officers. He was charged under section 81 of the Public Health Amendment Act 1902. Another reason why a meaning may be unclear is due to ambiguity. ...read more.

In the case of London & North Eastern Railway Company v Berriman (1946) a railway worker was killed doing maintenance work - oiling points along a railway line. His widow tried to claim compensation but failed after the courts took the words, "relaying" and "repairing" in their literal meaning and said that oiling points was maintaining and not replaying or repairing. Professor Michael Zander has denounced the literal rule as being mechanical and divorced from the realities of the use of language due to such rulings through this approach. Looking at the Act and case at hand, The Child Safety Act 2003, it can be argued that this is interpreted literally. The broad terms used in the statute such as 'any person' means that it would be applicable to every person. This would therefore include Jemima and any other child younger than her who is likely to be negligent as to such circumstances. However, in contrast with this point, a young person under the age of 10 is not considered in law to be capable of deciding what is a wrong action or a right one and is therefore considered to be too young to be held criminally liable. Another broad term used in the Act is 'other toys'. Whether the homemade go-kart would construe as a 'toy' is debatable. Although Jemima sold her self-constructed go-kart to Patrick, there was no legal contract of the sale. It can therefore be debated as to whether the statute would be applicable to such circumstances. ...read more.

The Ejusdem Generis Rule is one application of this general rule. The rule here is that where general words follow particular words, the general words are to be restricted to things of the same kind as those, which are specified. An illustration of this can be seen in the case of Powell v Kempton Park Racecourse Company (1899) where the court were trying to decide whether an Tattersal Ring, an open air enclosure, came under "other places." Other place were general words, "house, office" were the particular words. It was held that "other places" were indoor environment and therefore Tattersal's Ring; an outdoor plain was not included under that category. Thus in the context of the Child Safety Act with regards to the above rule, "other toys" as stated by the act are general words whereas "skateboard, roller-skates, roller blades bicycle," are particular words. The meaning of the general words has to be limited to something similar to the meaning of the particular word. A "pogo stick" therefore, although arguable, may not come under this category, as all the other particular words are "wheeled toys," whereas a pogo stick does not have wheels. It would be helpful if there was one specific method of statutory interpretation that was always used in cases. At the moment it is entirely up to the individual judge who is hearing the case to use whichever rule or approach he wants. This can sometime make it hard for lawyers to advice on what meaning will be used on a disputed phrase of an Act of Parliament. Word Count: 2558 - 1 - ...read more.