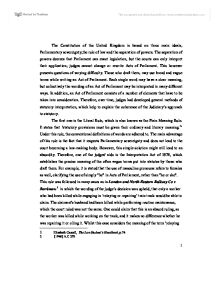 The Constitution of the United Kingdom is based on three main ideals; Parliamentary sovereignty,the rule of law and the separation of powers. The separation of powers decrees that Parliament can enact legislation, but the courts can only interpret their application; judges cannot change or rewrite Acts of Parliament. This however presents questions of varying difficulty. Those who draft them, may use broad and vague terms while writing an Act of Parliament. Each single word may have a clear meaning, but collectively the wording of an Act of Parliament may be interpreted in many different ways. In addition, an Act of Parliament consists of a number of elements that have to be taken into consideration. Therefore, over time, judges had developed general methods of statutory interpretation, which help to explain the coherence of the Judiciary's approach to statutory. The first one is the Literal Rule, which is also known as the Plain Meaning Rule. It states that 'statutory provisions must be given their ordinary and literary meaning.1' Under this rule, the conventional definitions of words are adhered to. The main advantage of this rule is the fact that it respects Parliamentary sovereignty and does not lead to the court becoming a law-making body. However, this simple solution might still lead to an absurdity. Therefore, one of the judges' aids is the Interpretation Act of 1978, which establishes the precise meaning of the often vague terms put into statutes by those who draft them. For example, it is stated that the use of masculine pronouns refers to females as well, clarifying the use of simply "he" in Acts of Parliament, rather than "he or she". ...read more.

is the statute trying to rectify, what is the nature of the remedy, and finally, that statutes should be interpreted in a way that avoids the mischief.8 By the Law Commission in 1969 this rule had been described as the most satisfactory of the all the rules and called a "rather more satisfactory approach". The Mischief rule avoids absurdity and injustice as well as resolving any statutory problem, which Parliament could not predict or intend to correct. It gives the judges more power in interpreting an Act of Parliament. It is worth noting, however, that this rule has some disadvantages as well. First of all, it limits the court to using previous common law rules in order to interpret the actual Act of Parliament. Secondly, it can give too much power to an unelected judiciary. But the explanation is that since the 16th century the law has changed and without new statutes it would not be up-to-date. Parliament does not have time to constantly amend Acts, therefore judges must imply some resolutions. Lord Wilberforce and Lord Edmund Davies argued that by the mischief rule judges were not interpreting legislation but re-writing it.9 However, real-life application shows that it can not be avoided and it can not be expected that legislation will be able to predict all aspects of everyday life. In 1993, it was held in the case of Pepper v. Hurt10 that to avoid the mischief in interpretation of the case, judges are able to look into Hansard's report of parliamentary debates during the passage of the legislation, to see what the Minister had said. ...read more.

given a wider meaning than they would bear in the law of contract, that is the meaning that should be given to them.'15 If the judges applied a different rule, such as the golden rule, then the defendant would be likely to be found to be guilty. The judges disagreed with that view, claiming it was better both with respect to Parliamentary sovereignty and for the case, that they used the Plain rule. The court overruled this decision in the same year. Therefore, it can be assumed that the statute's interpretation in this case was not correct. However, the same decision from Fisher v Bell was later applied in the case of Partridge v Crittenden. 16 Later Parliament passed legislation such as the Trades Description Act 1968, which stated that 'invitation to treat' should be treated in the same way as 'offer for sale', clarifying the issue. Rules of statutory interpretation are important in the English courts. They help us understand the way in which lawyers and judges interpret Acts of Parliament. These rules must be adhered to, or else each judge could simply make any decision depending on his mood or disposition, something that might be considered very unethical. It can take time and experience to understand why a certain rule was used and not another one. Perhaps it is best to leave legislation to Parliament and interpretation to judges. The principle can be quoted as follows: "So far as it is possible to do so, primary and subordinate legislation must be read and given effect in a way which is a compatible with Convention rights. ...read more.