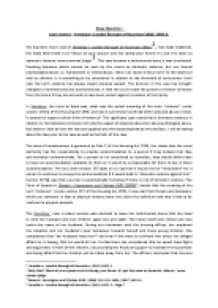 ﻿Essay Question: Case analysis - Yemshaw v London Borough of Hounslow (2011) UKSC 3: The Supreme Court case of Yemshaw v London Borough of Hounslow (2011)[1] , has made headlines, the Daily Mail titled it as ?Shout at your spouse and risk losing your home: It's just the same as domestic violence, warns woman judge?[2]. This case became a controversial area, it was scrutinised. Shouting between adults cannot be seen by the courts as domestic violence, but nor should psychological abuse i.e. harassment or verbal abuse, these can cause serious harm to the adults as well as children. It is something to be considered in relation to the threshold of seriousness. Until now the term violence has always meant physical assault. The decision in the case has brought changes to homelessness law and family law, in that the courts have the power to remove someone from the home if they are accused to have been violent against members of the family. In Yemshaw, the issue at hand was, what was the actual meaning of the term ?violence? under section 177(1) of the Housing Act 1996, and was it just limited confined within physical abuse or does it extend its scope to other form of violence? This significant case ruled that in domestic violence in relation to homelessness includes not only the aspect of physical abuse but also psychological abuse. But before I look at how the law was applied and the reasoning behind the decision, I will be taking about the law prior to the case as well as the facts of the case. ...read more.

Lady Hale recognised the changing understanding of the word at both an international and national level. Lady Hale said that in Danesh, the courts preferred a narrow construction under section 177(1) that ?violence is defined as violence or threats of violence?. Violence itself included conducts which put a person in fear of violence, but there are some conducts which would not be described as threats. For example, in the case of R v Ireland (1998)[9] which concerned silent phone calls that constituted to physiological harm under the Offences against a Persons Act 1861. Also other abusive behaviour such as ?locking a person (including a child) within the home or depriving a person of food or of the money to buy food?[10] has now been recognised as domestic violence. The meaning of violence under the 1996 act had expanded, ?it is not a term of art... capable of baring several meanings and applying to many different types of behaviour?[11]. The Supreme Court made it clear that when deciding on the actual meaning of the statute, it is not for the government to decide but for courts to interpret it. The question is whether the new meaning is consistent with the legislative statutory purposes. The term ?domestic violence? should be applied through factual circumstances at the current changing time. Under section 177 of the Housing Act 1996 ?domestic violence? in homelessness cases, has moved away from the stereotypical view that it is only about women being battered and actual physical contact. The term ?domestic violence? should be interpreted via the Practise Direction (Residence and Contract orders: Domestic Violence) (No.2) ...read more.

It is now clearer that the changing societies in terms of international and national understanding of legislating interpretation of the term “violence” has gone beyond the underlining meaning of physical abuse. It is now about making sure that a person is not obliged to live in a place where they feel it would not just be a risk themselves but also a risk to their family. The reasoning and approach adopted by the Judges in Yemshaw case brings together the different areas of housing law and homelessness within the area of family law. Parliament has given consideration in introducing new legislation in relation to domestic violence that would draw in the idea of ‘priority needed’, instead of leaving it to the local Authorities to decide. It will provide for clarification and consistency in the areas of law such as policy, housing and homelessness, which is essential for domestic violence victims. The Supreme Court decision in the case could hold difficulties for Local Authorities as they already have limited funds in providing accommodation, for now, a wider group of people of not just the physical aspect but also the physiological abuse. Statistics show that “there are significant financial costs which fall on the state as a result of domestic violence. Domestic violence is estimated to have cost then UK £25.3 billion in 2005-06”[16]. Baroness Hale has applied a limited interpretation the term “violence”, and therefore the decision can potentially be remitted to the Supreme Court as they are not bound by their decision and can depart from it in future cases. They would need to consider whether the decision should be changed depending on a wider application of the term “violence”. ...read more.