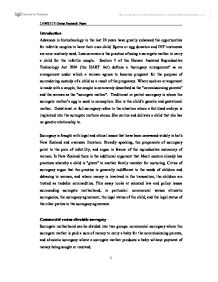 Introduction Advances in biotechnology in the last 20 years have greatly enhanced the opportunities for infertile couples to have their own child. Sperm or egg donation and IVF treatments are now routinely used. Less common is the practice of using a surrogate mother to carry a child for the infertile couple. Section 5 of the Human Assisted Reproductive Technology Act 2004 (the HART Act) defines a 'surrogacy arrangement' as an arrangement under which a woman agrees to become pregnant for the purpose of surrendering custody of a child as a result of the pregnancy. Where such an arrangement is made with a couple, the couple is commonly described as the "commissioning parents" and the woman as the "surrogate mother". Traditional or partial surrogacy is where the surrogate mother's egg is used in conception. She is the child's genetic and gestational mother. Gestational or full surrogacy refers to the situation where a fertilised embryo is implanted into the surrogate mothers uterus. She carries and delivers a child that she has no genetic relationship to. Surrogacy is fraught with legal and ethical issues that have been canvassed widely in both New Zealand and overseas literature. Broadly speaking, the proponents of surrogacy point to the pain of infertility, and argue in favour of the reproductive autonomy of women. In New Zealand there is the additional argument that Maori custom already has practices whereby a child is "given" to another family member for nurturing. Critics of surrogacy argue that the practice is generally indifferent to the needs of children and debasing to women, and where money is involved in the transaction, the children are treated as tradable commodities. This essay looks at selected law and policy issues surrounding surrogate motherhood, in particular: commercial versus altruistic surrogacies; the surrogacy agreement; the legal status of the child; and the legal status of the other parties to the surrogacy agreement. ...read more.

(iii) The commissioning mother The commissioning mother has no legal parental rights even where she is genetically related to the child. The status of the child Legal and biological parenthood becomes confused where a child is conceived and born due to a surrogacy arrangement. The aim of the Status of Children Amendment Act 1987, New Zealand's only statute devoted to assisted human reproduction,14 is to clarify the legal position of surrogate children. The Act does not anticipate recent technological advances allowing surrogate motherhood, nor does it grant parental status to egg or sperm donors because it was deemed inappropriate to impose rights and liabilities of parenthood on, generally anonymous, donors. Surprisingly, the act does not recognise the right of the child to have access to the identity or the medical history of the donor, even though it followed closely on the heels of the Adult Adoption Information Act 1985 that recognised the importance of allowing greater access to information for people involved in the adoption process. Where the surrogate mother hands the child to the commissioning parents, who raise him or her as their own, legal parenthood does not automatically follow the handover. The only option currently available to commissioning parents to obtain legal parental status is to adopt the child. However, the particular requirements of the Adoption Act 1955 and Child, Youth and Family processes can make adoption a problematic option. How then, can a family unit be constructed after a surrogate birth? (i) Informal arrangements While there have only been two New Zealand decisions involving surrogacy,15 empirical evidence suggests that a number of children have been born as the result of informal surrogacy arrangements. In these cases the surrogate mothers name is left on the birth certificate with the commissioning parties relying, not on a legal parenthood, but rather on the goodwill of all concerned. This can create significant problems as the commissioning parents have no legal parental rights and obligations16 and the child can be removed from their care at any time. ...read more.