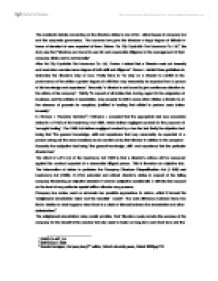 The academic debate concerning on the directors duties is one of the oldest issues in company law and the corporate governance. The common law gave the directors a large degree of latitude in terms of standard of care expected of them. Before Re City Equi

The academic debate concerning on the directors duties is one of the oldest issues in company law and the corporate governance. The common law gave the directors a large degree of latitude in terms of standard of care expected of them. Before Re City Equitable Fire Insurance Co. Ltd1, the duty was that "directors are bound to use fair and reasonable diligence in the management of their company affairs and to act honestly". After Re City Equitable Fire Insurance Co. Ltd, Romer J stated that a "director must act honestly and must also exercise some degree of both skill and diligence". Romer J added three guidelines to determine the director's duty of care. Firstly there is "no duty on a director to exhibit in the performance of the duties a greater degree of skill than may reasonably be expected from a person of his knowledge and experience". Secondly "a director is not bound to give continuous attention to the affairs of his company". Thirdly "in respect of all duties that, having regard to the exigencies of business, and the articles of association, may properly be left to some other official, a director is, in the absence of grounds for suspicion, justified in trusting that official to perform such duties honestly". In Norman v Theodore Goddard2, Hoffmann J accepted that the appropriate test was accurately stated in s 214(4) of the Insolvency Act 1986, which defines negligent conduct for the purposes of 'wrongful trading'. The 1986 Act defines negligent conduct by a two tier test firstly the objective test being that "the general knowledge, skill and experience that may reasonably be expected of a person caring out the same functions as are carried out by that director in relation to the company". Secondly the subjective test being "the general knowledge, skill and experience that the particular director has". The effect of s.214 (4) of the Insolvency Act 1986 is that a director's actions will be measured against the conduct expected of a reasonable diligent person. ...read more.

In previous common law which divided into two streams. Firstly those cases when the courts generally had low expectation of the standard of the care to be expected of directors and the secondly those cases decided after the Donoghue v Stevenson25. In Re Cardiff Saving Bank,Marquis of Bute's Case26,where Stirling J formulated what has been described as the 'intermittent' theory of directors duties such as a directors must exercise care at the meeting at which he is actually present, but owes no duty to attend any specific meeting or even any meeting at all27 The standard of care28 previously was that directors were required to use "fair and reasonable diligence in the management of their company affairs and to act honestly". The approach of Neville J29 was one where a semi-subjective standard of care was preferred. The duty was held to be that "director must use reasonable care must be measured by the care an ordinary man might be expected to take in the same circumstances on his own behalf". The effect of s.174 (2) is that it adopts in Re D'Jan of London Ltd where Lord Hoffmann's position and mirrors the wrongful trading provision under s 214(4) of the IA 1986. Therefore under the new provisions a director's actions will be measured against the conduct expected of a reasonably diligent person namely the subjective test. However recent cases have adopted a strict approach towards the standard of care expected of directors. It appears that the duty set out in s.174 adopts the Norman v Theodore30 test prescribed in the Insolvency Act 1986 for judging whether directors are in breach of their duty under the section. The courts are familiar with this test which they have used to assess compliance with a director's common law duty of skill and care and this is likely to continue under the 2006 Act as well. The duties of directors to avoid conflict of interest The core obligations is a duty of an directors is loyalty31, which includes ...read more.

There were particular concerns about introducing the statutory statement of director's duties specifically the obligation in CA 2006, under section 172 which require directors to promote the success of the company60. The concern was that shareholders activists might use the combination of the new derivative procedure and s 172 to challenge business decisions of directors on the basic of an alleged failure to have regard to the factors set out in the section. A derivative claim could be argued to use to seek judicial review in effect of commercial decision of management. It is also appears that the new regime will potentially allow a broader range of claims to be brought more easily than the case in the common law. E.g, an employee or an environmental group holding shares could potentially bring an action under the new provision alleging that the directors are in breach of their duty by not taking into account their interest as required by the new statement of director's duties. Directors who wish to stay out of trouble will probably be wise to view the unfair prejudice law as a very broad type of director's duty, at procedural level the unfair prejudice remedy has an even greater impact in the law on director's duties61. By considering the above overall discussion, it is suggested that the remedies for the breach of director's duties should be stated in the statue along with the substantive duties. It is noted that section 178 applies only to the general duties which is laid put in s171 to s177. However, it is also noted that the second proposition in s178 is not applied to the duty to exercise reasonable care, skill and diligence in line with the modern view that this is not a fiduciary duty. The remedy for that duty is normally confines to damages.There are also number of uncertainties as to whether the remedy available is personal or proprietary. ...read more.