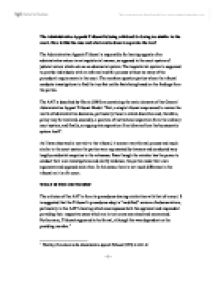 The Administrative Appeals Tribunal is being criticized for being too similar to the court. How is this the case and what can be done

The Administrative Appeals Tribunal is being criticized for being too similar to the court. How is this the case and what can be done to separate the two? The Administrative Appeals Tribunal is responsible for hearing appeals of an administrative nature in an inquisitorial manner, as opposed to the court system of judicial review which acts as an adversarial system. The inquisitorial system to supposed to provide individuals with an informal and fair process without as many of the procedural requirements in the court. The members question parties where the tribunal conducts investigations to find the true fact unlike facts being based on the findings from the parties. The AAT is described by Harris (1991) as containing the main elements of the General Administrative Appeal Tribunal Model: "first, a single tribunal empowered to review the merits of administrative decisions, particularly those in which discretion and, therefore, policy may be involved; secondly, a position of institutional separation from the ordinary court system; and finally, an appropriate separation if not divorce from the bureaucratic system itself". As I have observed in my visit to the tribunal, it seems a very formal process and much similar to the court system the parties were represented by lawyers and conducted very lengthy evidential enquiries to the witnesses. Even though the minister has the power to conduct their own investigations and clarify evidence, the parties made their own arguments and opposed each other. In this sense, there is not much difference in the tribunal as it is of a court. WHAT IS THE CRITICISM? The criticism of the AAT is from its procedures sharing similarities with that of a court. ...read more.

Many of the decisions given to tribunals concern the merits of cases with relatively little legal content, and in such cases a tribunal, usually consisting of a legally qualified chair and two experts, may be preferred to a court. It is, however, unrealistic to imagine that technicalities and difficult legal issues can somehow be avoided by entrusting the administration of complex legislation to tribunals rather than the courts.6 The Franks Committeee considered that "tribunals should properly be regarded as machinery provided by Parliament for adjudication rather than as part of the machinery of administration", and it made a number of detailed recommendations (most of which have been implemented to achieve that object and to improve the procedure at statutory inquiries that preceded a ministerial decision. The Franks Committee sought the qualities of "openness, fairness and impartiality" in tribunals. Since then there have been added the quests for efficiency, expedition and economy.7 Tribunals have not been forced into a strait-jacket of uniformity, but their essentially adjudicatory role has been emphasized by rules underlining their independent status, ending undue informality, regularizing procedures, requiring them to give reasons when requested and, in general, providing for appeals to the High Court on points of law from tribunals of last resort.8 Procedure inquiry rules lay down a number of procedural safeguards for participants at inquiries, incuding the right to know the opposing case in advance; the publication with reasons of the inspectors' reports (and reasons given for the Minister's disagreement in such cases); the right of representation; and provision for the appearance at the inquiry of third parties. As we shall see, the requirements of a fair hearing in common law may at times supplement these statutory requirements.9 ADVERSARIAL vs. ...read more.

An inquisitiorial approach will therefore add to the budget expenditure of the tribunal, and unless it is 'properly resourced, both financially and in terms of the appropriate staff, it will not be able to be effective if it uses inquisitorial procedures'. As Dwyer indicates, there must be appropriate government finding if the AAT are to adopt an inquisitorial approach. 3. In the Australian legal system, Mahoney JA comments that 'it is the expectation of the parties' that an inquisitorial procedures if they are to face an inquisitorial tribunal. Similarly, tribunal members and the lawyers involved in representing parties before the tribunal require training on the inquisitorial model. Dwyer comments that the Australian legal system 'should no longer be educated to believe that there is greater virtue in an adversarial than in an inquisitorial hearing'.14 The current Administrative Appeals Tribunal has adopted a system of "modified adversarialism". It has inquisitorial elements in terms of the informality outlined in section 33(1)(b) of the AAT Act but is run predominantly within an adversarial framework. Dwyer insists that the introduction of an inquisitorial system will "increase the likelihood of the Tribunal making the correct and preferable decision on the true facts". The implementation of Dwyer's recommendations is a positive step towards an improvement of the AAT system, but as Dwyer notes "there are significant costs and challenges involved in reducing the degree of adversarialism'. If the tribunals are given the necessary resources to meet these challenges, an inquisitorial system will improve the current system that forces it to behave "too much like a court". Therefore, even though the power and objective of the AAT is different to that of a court the inquisitorial process does predominantly behave much like that of the court adversarial system and this problem should be addressed. ...read more.