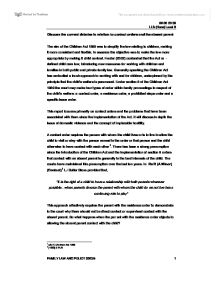 The aim of the Children Act 1989 was to simplify the law relating to children.

Discuss the current debates in relation to contact orders and the absent parent The aim of the Children Act 1989 was to simplify the law relating to children, making it more consistent and flexible. In essence the objective was to make the law more appropriate by making it child centred. Hester (2002) contended that the Act re-defined child care law, introducing new measures for working with children and families in both public and private family law. Generally speaking the Children Act has embodied a fresh approach to working with and for children, underpinned by the principle that the child's welfare is paramount. Under section 8 of the Children Act 1989 the court may make four types of order within family proceedings in respect of the child's welfare: a contact order, a residence order, a prohibited steps order and a specific issue order. This report focuses primarily on contact orders and the problems that have been associated with them since the implementation of the Act. It will discuss in depth the issue of domestic violence and the concept of implacable hostility. A contact order requires the person with whom the child lives or is to live to allow the child to visit or stay with the person named in the order or that person and the child otherwise to have contact with each other1. There has been a strong presumption since the introduction of the Children Act and the implementation of section 8 orders that contact with an absent parent is generally in the best interests of the child. The courts have maintained this presumption over the last ten years. In Re R (A Minor) (Contact)2 LJ Butler Sloss provided that, "It is the right of a child to have a relationship with both parents wherever possible...when parents divorce the parent with whom the child does not live has a continuing role to play" This approach effectively requires the parent with the residence order to demonstrate to the court why there should not be direct contact or supervised contact with the absent parent. ...read more.

It maybe of some coincidence that the term implacable hostility received a softened approach in Re D (A Minor) (Contact: Mothers Hostility)5 where the mother's attitude was plainly regarded as significant. Lord Justice Balcombe commented that the implacable hostility of the mother towards contact was a factor, which was capable, according to the circumstances of each particular case, of supplying a cogent reason for departing from the premise that a child should grow up in the knowledge of both his parents. Again in Re K (Contact: Mothers Anxiety)6 the mothers concerns were regarded as important when the judge held that contact created intolerable anxiety for the mother and led to unmanageable stress for the child. Hillman (2002) stated that the same theme of giving greater weight to the causes underlying why extreme hostility may have come about, was seen in the following Court of Appeal cases below. On the 19th June 2000 the President, Thorpe and Waller LJJ gave their judgements in Re L, V, M and H (Contact: Domestic Violence)7. These were four appeals in contact cases where a Circuit Judge against a background of domestic violence had refused the fathers' application for direct contact. Mr Jeremy Posnansky QC acted as amicus curiae in each case and had instructed two consultant psychiatrists, Dr's JC Sturge and JC Glaser to provide a report and advise in all four appeals. The psychiatric report pointed out, inter alia, the risks involved where direct contact might cause emotional abuse and damage, emphasising that the decisions about contact should be child centred and the purpose of the proposed contact should be abundantly clear, with the potential of benefiting the child. The view that there should be no assumption that contact to a violent parent was in the child's interests. If anything, the assumption should be in the opposite direction with the violent parent proving why he or she could offer something of benefit to the child. ...read more.

It was held that the emotional needs of the child were at the centre of what the court must consider. Direct contact with the child would adversely affect the child and would affect the emotional stability of the home. The initial analysis indicated that where the Guidelines were being used they had a positive impact. A second survey is currently being undertaken. On the 19th March 2003 the Government published its response to the Children Act sub-committee report, Making Contact Work. This followed two years of consultation after the original report was published in 2002 on how to underpin contact arrangements between children and their non-residential parents. Although the report was not primarily about the issue of domestic violence it was addressed in the first recommendation from the report. The outcome of this recommendation was the introduction of new forms to ensure that judges are aware of, and address concerns about domestic violence, at the start of contact cases. The government is aware that the issue of the enforcement of court ordered contact continues to be a major issue that needs further attention. What is important is that it is being addressed but will not be solved over night. On the 18th June 2003 the Government published Safety and Justice: The Governments Proposals on Domestic Violence. The consultation paper has asked whether or not the current child contact arrangements provide the right level of support and safety for all family members and if not what else should be done. Ministers are considering the responses to this paper before deciding on what action to take this summer. To date there has been little research into the effects of enforced direct and in-direct contact on a child where there has been an element of domestic violence. The best interests of a child are the courts paramount consideration. To be able to act in full accordance with this principle further research is essential in this highly sensitive area. ...read more.