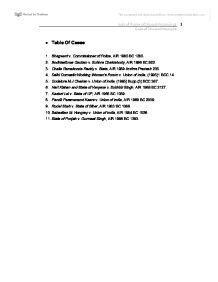 The aim of this project is to explore and analyse the role of the victim during criminal proceedings. The project aims at analyzing the interaction of the victims with the constituent elements of the criminal justice system ie. the police, lawyers and cou

* Table Of Cases 1. Bhagwant v. Commissioner of Police, AIR 1985 SC 1285. 2. Bodhisattvwa Gautam v. Subhra Chakraborty, AIR 1996 SC 922. 3. Challa Ramakonda Reddy v. State, AIR 1989 Andhra Pradesh 235. 4. Delhi Domestic Working Women's Forum v. Union of India, (1995)1 SCC 14. 5. Gudalure M.J Cherian v. Union of India, (1995) Supp.(3) SCC 387. 6. Hari Kishan and State of Haryana v. Sukhbir Singh, AIR 1988 SC 2127. 7. Kasturi Lal v. State of UP, AIR 1965 SC 1039. 8. Pandit Paramanand Kaara v. Union of India, AIR 1989 SC 2039. 9. Rudal Shah v. State of Bihar, AIR 1983 SC 1086. 10. Sebastian M. Hongray v. Union of India, AIR 1984 SC 1026. 11. State of Punjab v. Gurmeet Singh, AIR 1996 SC 1393. * Table Of Statutes 1. Code of Criminal Procedure, 1973. 2. Constitution of India, 1950. 3. Indian Medical Council Act, 1956. 4. Indian Penal Code, 1860. 5. Probation of Offenders Act, 1958. * Introduction "For too long, the law has centred its attention more on the rights of the criminal than on the victims of crime. It is high time we reversed this trend and put the highest priority on the victims and potential victims" - President Gerald R. Ford1 The available historical work in the field of criminal law relating to the role of the victim in criminal proceedings reveals a steady evolution away from the "private," or individual, sphere to the "public" or societal one. In Europe and England after the collapse of the Roman Empire, the victim and the criminal process were intimately linked. No formal government structure existed; thus, "criminal justice" largely depended on self-help or the help of kin. The blood feud constituted the major enforcement mechanism, both in England and on the continent: The victim, or his or her kin, exacted vengeance against and repayment from the perpetrator or his kin. ...read more.

* Compensation must be available to all victims of crime. * All expenses incurred by the victim such as medical bills and loss of wages etc. must be covered. * The compensation plan must provide for a speedy system of compensation. In India there is neither a comprehensive legislation nor a statutory scheme providing for compensation by the state or by the offender to victims of crime. The state generally makes to the victims ex-gratia payment, which is not only ad hoc and discretionary but also inadequate. The Indian criminal law system does not provide for institutionalized payment of compensation to victim of a crime for any 'loss' or 'injury'- physical, mental or psychological- caused to him by the offender. The Law Commission of India felt that it was 'unwise' to create a legal right in favour of the victim to join in the criminal proceedings as a third party to avoid mixing up of civil and criminal proceedings, a confusion of issues and prolongation of trial. It also could not see 'great advantage' in providing for 'duty to make amends for harm caused' or 'payment of compensation to the victim of the offence as an additional punishment. It favoured payment of compensation out of fine imposed on the offender30. Section 357 of the Criminal procedure Code, 1973 inter alia, empowers a criminal court, in its discretion, to award compensation to any person for any loss or injury caused by an offence in those cases where 'fine' does or does not form a part of the sentence imposed. Section 421 of the CrPC empowers the criminal court passing a sentence of fine, in its discretion, to recover this amount by attachment and sale of any movable property of the offender and/or as arrears of land revenue from his movable or immovable property or both. However the court is not empowered to adopt either of the methods when the offender has undergone the whole of the imprisonment awarded in default of payment of the fine ...read more.

* Measures should be taken when necessary to ensure the safety of victims and their families and to protect them from intimidation and retaliation. * Enhanced training should be made available to sensitize criminal justice personnel to the needs and concerns of victims and guidelines developed, where appropriate, for this purpose. * Victims should be informed of the availability of health and social services and other relevant assistance so that they might continue to receive the necessary medical, psychological and social assistance through existing programs and services. * Victims should report the crime and cooperate with the law enforcement authorities. In the USA an amendment to the constitution has been proposed which guarantees the victims certain rights in order to enhance their role during criminal proceedings and to make the victim a major player in the criminal justice system. The Victim's Bill of Rights Amendment seeks to elevate crime victims to the same constitutionally protected status as criminal defendants. The Amendment would give victims seven constitutionally protected rights: (1) the right to be informed of the proceedings; (2) the right to be heard at certain crucial stages in the process; (3) the right to be notified of the offender's release or escape; (4) the right to proceedings free from unreasonable delay; (5) the right to an order of restitution; (6) the right to have the safety of the victim considered in determining a release from custody; and (7) the right to be notified of all these rights.50 In India too the time has come to enact a legislation or to amend the Code of Criminal Procedure along the lines of the American Victim's Bill of Rights Amendment. Such a legislation or amendments would give legal rights to victims in India which would be protected by the courts. It would ensure the victim of total participation in the criminal justice system and enable him to play an extremely important and effective role in criminal proceedings, which would not only serve his interests but the interests of the criminal justice system as a whole. ...read more.