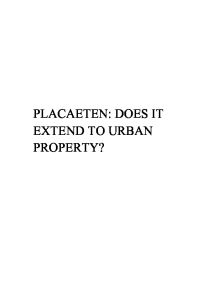 The applicability of the Placaeten (passed by the Estates of Holland on 26 September 1658 and re-enacted thereafter on 24 February 1696) to rural tenements, or to both rural and urban tenements has long been a contentious and controversial issue in South

PLACAETEN: DOES IT EXTEND TO URBAN PROPERTY? 1. TABLE OF CONTENTS 1. Introduction 2 2. Historical background and development 2 3. Application in South African case law 3 4. Current position 8 5. Academic view 9 6. Conclusion 10 7. Bibliography 11 2. 1. INTRODUCTION The applicability of the Placaeten (passed by the Estates of Holland on 26 September 1658 and re-enacted thereafter on 24 February 1696) to rural tenements, or to both rural and urban tenements has long been a contentious and controversial issue in South African law. It is a question that has enjoyed much attention and deliberation by both our courts and academic writers alike. If the Placaeten is to be applied correctly in our law and if the correct interpretation is to be followed, the historical development and reception thereof into South African law need to be understood, and a thorough understanding of the nature and application of the Placaeten in our law need to be sought. 2. HISTORICAL BACKGROUND AND DEVELOPMENT Before the introduction of the Placaeten in 1658, the prevailing Roman Dutch law determined the legal position of the lessee when it came to his/her rights with regards to removal of or compensation for improvements made to the property of the lessor. Roman Dutch law determined that the lessee is entitled to remove useful and luxurious improvements, provided that they can be removed without leaving the property in a worse condition then it was at the inception of the lease. The lessee was also not entitled to remove necessary improvements, but would have a claim for his/her expenses in this regard1. ...read more.

In Spies v Lombard10 the Appellate division considered whether the placaeten ever became part of South African law and to what extent. The Court considered article 9 of the placaeten which dictates that lessees of rural land are not allowed to make over their lease or rights, by selling, donating or exchanging without first obtaining the written consent of the owner. This prohibition was specifically directed against "Bruyckers ofte Pachters" which refer to the lessees of rural land. The court found inter alia that some of the rules derived from the placaeten had become part of our law through reception by the courts, and more specifically those contained in articles 10 to 13.Although the question as to the validity of section 9 of the placaeten in South African law was decided upon, it was also clear that the term "Bruyckers van Landen" which was similarly used throughout the Placaeten, made reference to lessees of rural land and not urban property. The fact that the obiter dictum in the De Beers case extended art 10 to 12 to both rural and urban property, while interpreting and considering the exact same terms and wording of the placaeten, 6. to wit "landen", could create confusion. This creates an anomaly according to Kerr11, as according to him, these four articles should either apply to rural property only or to both rural and urban property. In the case of Syfrets PMB v Estate & Co-op Wine Distributor12 the court confirms in judgement that the placaeten have been received into South African law and refers with approval to the De Beers and Van Wezel cases in support of this view. ...read more.

He states that in a grammatical context its meaning relates to agricultural land or rural property, and that up to 1989 there seems to have been a general perception in legal sources that landen was used in the placaeten with this standard meaning. Referring to van der Keesel19, he concludes that "the earlier authorities who considered that the Placaeten applied to rural land only, are correct"20 His reference to earlier authorities seems to refer to the legal position before the judgement was delivered in Syfrets Participation Bond Managers v Estate and Co-op Wine Distributors21 in 1989, but he revisits the subject a few years later22 and makes it clear that, the scope of the placaeten should not be extended to include leases of urban property, and is of the opinion that if reform is needed, it should be done by legislature in repealing the placaeten and enacting statutes that conform more to modern needs. Kahn23 also spends time on interpreting the placaeten, and similarly concludes that the placaeten clearly does not apply to urban tenements. 10. 6. CONCLUSION It seems that the general approach taken by our courts over a period of time was that the placaeten did extend to urban properties. In interpreting the meaning and application of the placaeten, it is clear from most recent case law that this approach is erroneous, and that urban property is not included. Taken together with the very strong opinions of modern South African writers to the same effect, it is clear that the Placaeten of 1658 never included an extension to urban property, and that any attempts to advocate that it does, would be the result of a misconstrued, incorrect or even an incomplete interpretation of the Placaeten. 11. 8. ...read more.